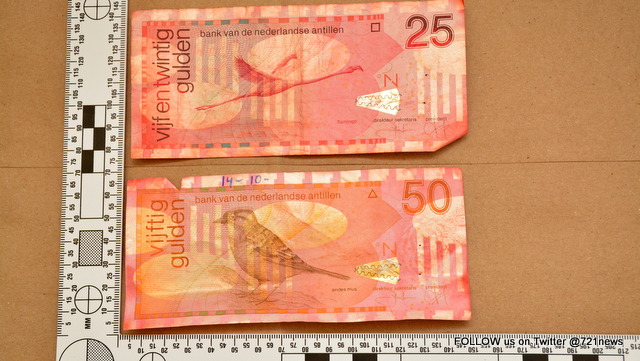 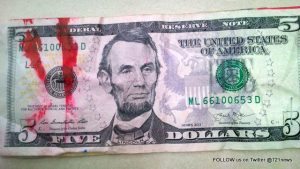 PHILIPSBURG, Sint Maarten — The St Maarten Bankers Association has made an announcement in order to provide clarity and reassure the Business Community and residents on the issue of red marked bills in circulation. The Bankers Association informs that there is a distinct difference between bills marked with a small red marking in the corner and dye-stained bills. In order to ensure all fully understand, the Association has released two samples of bills.

The first sample (A) shows bills which are marked with a small red mark in the corner of the bill, while the second sample is a dye-stained bill. In the case of the first sample, these bills with the small red mark in the corner are good bills and will be accepted and honored by all banks on the island. The second sample (B) of dye stained bills will not be honored by the Banks.

The Bankers Association felt it important to make this public announcement and provide the samples in order to ease the concerns of the Business Community and general public, which has caused quite some unease.

Following the announcement by the Police authorities of dye stained bills last week, local Banks started to exercise precautions with bills marked with red. Residents complained of receiving such bills from local ATM terminals and the Business community refused to accept them for fear of not being able to deposit such bills. Upon further investigation, it was realized that there are many bills in circulation that have small red marks and as such, these bills will be honored by the Banks. “We sincerely hope that by providing the two samples, the business community will begin accepting the bills with a small or an insignificant red mark as the Banks will honor these bills” stated Derek Downes President of the Bankers Association.

Businesses and residents are still being advised to exercise caution in identifying bills that are heavily stained with the red dye, as these are will not be honored by the Banks. 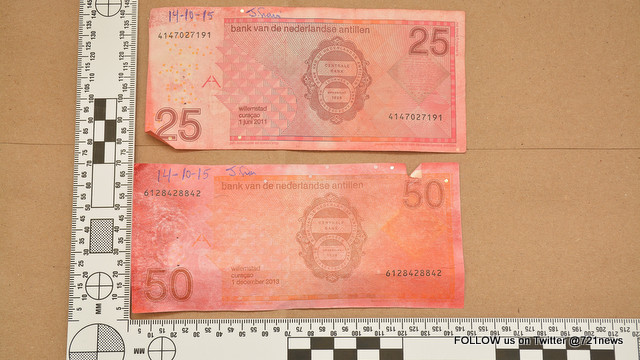 In regard to the ongoing armed robbery investigation at the Rouge et Noire Casino, which took place on October 8th and whereby an amount cash was stolen, the police department is making the following statement:

During this robbery an amount a cash consisting of U.S. currency and Antillean Guilders (bills/notes) were stolen by the robber. A “dye-pack” which was also placed together with the stolen money exploded after discoloring most of the bank notes.

There is serious confusion circulating on how to deal with the situation once you are in possession of this suspect currency. The police department is aware that a meeting by the Associations of Banks on the island will be held tomorrow and they will deliver a statement as soon as possible.

In the meantime businesses and persons who come in contact with partially or completely red stained U.S. currency or Antillean Guilders (bills/notes) should not accept them and should immediately inform the police.

If anyone is the possession of a small amount of bank notes that are stained, they should immediately take them to the bank that will confiscate them and later deliver them to the police department for further investigation.

There are bank notes in circulation that may have a very small discoloration around the edges and most probably are not connected to this investigation. Persons who may have this currency in their possession and are not quite sure that it is legitimate should get in contact with their bank and have the money checked out. (See pics of Ant. Guilder bills attached)