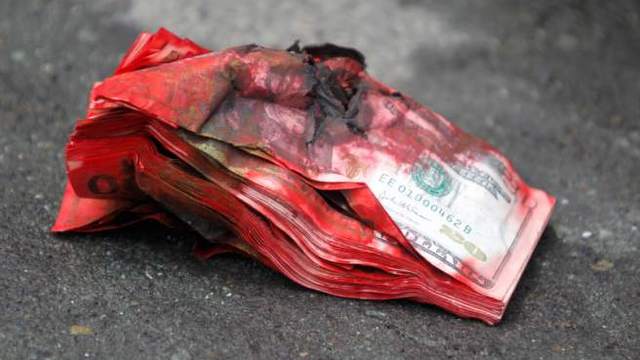 In connection with the ongoing investigation of the armed robbery at the Rouge et Noire Casino which took place late in the evening on October 8th 2015, the Police Department wants the inform the general public with following.

During this robbery a money bag containing an explosive “dye pack” was stolen and taken from the casino. When the bag in question was removed from the casino it exploded and it stained all of the money inside of the bag with a red color, causing the money to become easily identifiable.

Any type of bleaching agent used in the attempt to remove this red dye will not help.  The investigators in this case have been informed of persons using or attempting to use this red tainted money. The entire community and businesses are warned not to accept or use this money.

Attempts are also been made by these persons to use this money in cellular phone vending machines and other machines such a gambling machines.

Any caught in the possession of this money will become a suspect in this investigation.

Anyone who has been offered this money should not accept it and immediately get in contact with the police department.

The Police traffic department is investigating a serious traffic accident involving a white passenger Van with license plate P-6452 and a red off road motorcycle without any license plate.

The accident occurred on Monday October 12th at approximately 02.245 p.m., on the Airport road in the vicinity of Leisure Car Rental.

The cause of the accident was due to the high speed the motorcycle was traveling in, at the time he was overtaking a long line of vehicles in the corner.

The driver of the Van made e left turn to drive onto the parking lot of Leisure Car Rental at which time the motorcycle rider lost control and collided with the Van.

As result of this collision the motorcycle rider suffered severe lacerations to his face and bruises to his body.

The victim was treated on the scene by paramedics and then transported to the Medical Center for further treatment.