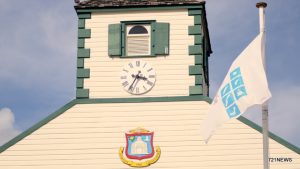 GREAT BAY – Keanu Valencio Arrindell and Jean Ely Fleurantin returned to the Pointe Blanche prison with a 4-year sentence to their name yesterday for an armed robbery at the Lucky Star supermarket and an attempt to rob the Ocean Star supermarket – both in Dutch Quarter – on March 20.

The two robbers – 18 and 19 years of age respectively – failed in their attempt to rob the star Ocean supermarket, because its owner managed to close his door on them. They then moved on to the Lucky Star supermarket where they put a gun against the owner’s head before robbing him of a mere $200.

Police found the two robbers shortly after the robbery in the yard of Arrindell’s home, 200 meters from the Lucky star supermarket. They were short of breath and sweating. On a scooter, officers found a balaclava that belonged to Fleurantin.