GREAT BAY – Jurendy Jacob B. has a criminal record that goes back to 2006. Yesterday the 27-year old was in court for a dozen armed robberies, committed between November 29 of last year and June 1 of this year. Prosecutor Nanouk Lemmers demanded a 15-year prison sentence in the court in First Instance. B. dragged down his 23-year old cousin Lorine L. with him; she is facing a 10-year prison sentence for providing transport and for firearm possession. Judge Yvonne Vanwersch will pronounce her verdict on October 14.

was released from the Pointe Blanche prison on October 13, 2014 under electronic surveillance. However, he was only provided with an ankle bracelet on February 18 this year, because the bracelets were not available before that date. The bracelet was removed on April 7 and from that moment B. was on conditional release. The probation officer told the court that during his electronic surveillance period, B. had traveled once to the French side of the island without permission. The ankle bracelets the probation office uses have GPS capability, so it is possible to pinpoint the exact whereabouts of participants in this program.

Hardly seven weeks after his release, B. was allegedly involved in his first armed robbery on November 29 whereby the Great Bay supermarket was the target. On December 5, the Pondfill supermarket got a visit from armed robbers. The prosecution told the court that there is insufficient evidence to convict B. for these robberies. “But it is quite possible that the police is right about their suspicions.” 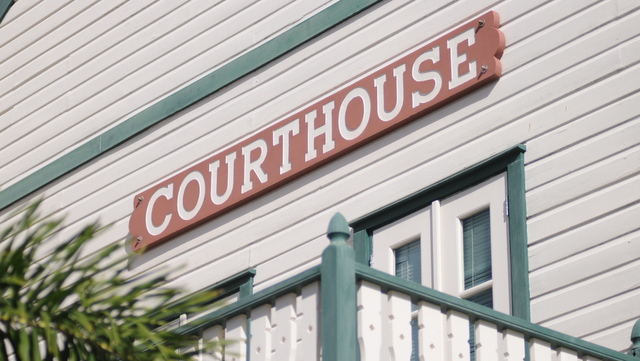 Prosecutor Lemmers held B. responsible for seven of these robberies. His niece Lorine L. is accused of involvement in six robberies. A third suspect in these crimes, identified as Blinger, was not in court.

The girl, who works as a secretary at the St. Maarten Medical Center, was always there when B. asked her to provide transportation. She had a car and a driver’s license, and B had none of that. Because the robbers consistently used the same car investigators were able to pin the crimes on Lorine L. and by association on Jurendy B.

The robbery on May 9 at the Amity supermarket did not go quite according to plan, because the supermarket owner came after them in his van and rammed their car with his bus. One of the robbers fired shots at the businessman.

On June1, B. and L. were finally arrested after their robbery at Bobby’s Food Market.

Prosecutor Lemmers found B. guilty of all but four of the robberies, based on video footage, statements from victims and the presence of the car.

The prosecutor considers Lorine L. an accomplice. “After the robbery at the Hai Hui supermarket, the owner ran after Jurendy. From there on, she must have knowns what was going on,” Lemmers said.

The timid 23-old, mother of a baby, told police after her arrest that she received $100 after every robbery and money for gas. “But as the investigation progressed, she took more and more of that statement back,” Lemmers said. “Now she says: I knew nothing about all this.”

The prosecutor noted that the girl had not entered any of the supermarkets, that she had not taken away any money, but that she was always there. “She had a driver’s license and B. needed her.”

Attorney Safira Ibrahim said that her client does not deny that she drove B. around. “But she is not the driver of a getaway car. That is something different altogether. She has consistently stated that she knew nothing about the robberies. I was only there to help, she said, and her statements are supported by statements from B.”

The attorney asked the court to acquit her client, also of the firearm possession charge, because her DNA had not been found on the weapon.

“I am not a magician, I cannot change any of this,” B.’s attorney Geert Hatzmann said. “I cannot tell my client what he should and should not say.”

The attorney limited his defense to the possible punishment that is awaiting his clients. “Fifteen years, that is a demand for murdering someone,” he said, adding the formula 7×2+1 – two years per robbery and one year for firearm possession. “I understand that the community has to be protected, but I wonder if it is correct to make such a simple calculation.

Hatzmann noted that he understands how robbery-victims feel, having been a victim himself once. “I am not going to an ATM at night anymore,” he said.

Hatzmann asked the court for a report from the Rehabilitation Bureau and a psychological evaluation. “This is a child in the body of an adult. He can hardly read or write. I want to know up to what point my client is limited in his capability to exercise his free will.”

Hatzmann also sought some perspective for his client, referring to a court ruling of last year whereby a suspect was sentenced to 10 years, of which 5 years were conditional.

Prosecutor Lemmers objected to the request for a psychological evaluation. “The suspect was arrested on June 1. This examination could have been requested much earlier. It is too late for that now. Furthermore, my demand is too high to impose part of it conditionally.”