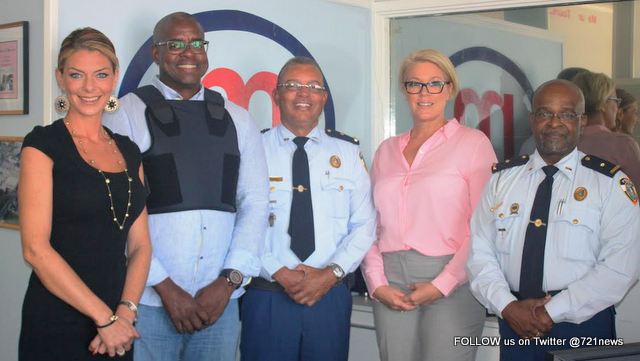 EMMAPLEIN, Sint Maarten — In the aftermath of Police Bike Patrol Officer Gamali Benjamin’s tragic demise, S.E.L. Maduro & Sons, in keeping with its pledge to the Police Force, has donated 10 bulletproof vests to Chief Inspector Rudolph C. Bloeiman and Chief Inspector Ricardo V. Henson. The vests are specifically for the Bike Patrol unit who are considered “Ambassadors” of St. Maarten.

Raquel Coupland Wathey, General Manager of S.E.L. Maduro and Sons, said: “The safety of our officers is very important to us as a business and members of the community. We deemed it necessary to step up to the plate and contribute to their well-being in the line of duty. After all, if we expect them to protect us, as residents, then we need to protect and support them.”

The Bike Patrol Officers are a fixture on the streets of Philipsburg. Their presence goes a very long way in creating a feeling of safety and security to residents, cruise lines and their passengers and stay-over visitors, Ms. Coupland Wathey said.

Member of Parliament (MP) and former Tourism Minister Franklin Meyers, whose brainchild it was to make the contribution of vests was on hand for the presentation. He is most concerned about the security of the country and the ensuing damage crime can cause on the tourism product.

“I hope these vests will help the officers who will don them feel a bit more secured as they keep us and our streets safe. It is unfortunate that a tragic incident and the loss of a valuable life brought us here, but today we can say we are making a difference. I commend the Police Force on their continued tireless efforts and dedication,” Meyers said. Meyers has also personally pledged two All-Terrain Vehicles (Quads) to the Police Department.

Chief Inspectors Bloieman and Henson were very honoured and grateful to receive the first bullet proof vest on behalf of the Police Force of Sint Maarten (KPSM) and stated that these vests would definitely help protect their officers when carrying out their duty which mainly is to provide the safety and security for the community and visitors to Sint Maarten.