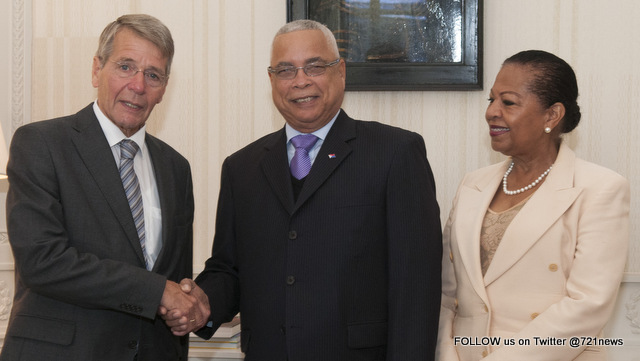 PHILIPSBURG, Sint Maarten – On the second day of his first working visit to Holland Prime Minister Marcel Gumbs met with the Vice-President of the Council of State for the Kingdom Piet-Hein Donner, where they exchanged views on current affairs.

Before becoming Prime Minister, Marcel Gumbs was an active member of the Council of Advice for Sint Maarten.

In a pleasant atmosphere, information was shared with respect to the position of Sint Maarten towards the current instructions that came from the Kingdom Council of Ministers.

Donner and Prime Minister Gumbs a discussed the National Ordinance to establish an Integrity Chamber, which has recently been brought to the Constitutional Court by the Ombudsman.

The Vice-President of the Council of State for the Kingdom Donnor, stressed the importance and need for a Kingdom dispute regulation and the need to improve communications between the four countries within the Kingdom and on all levels.