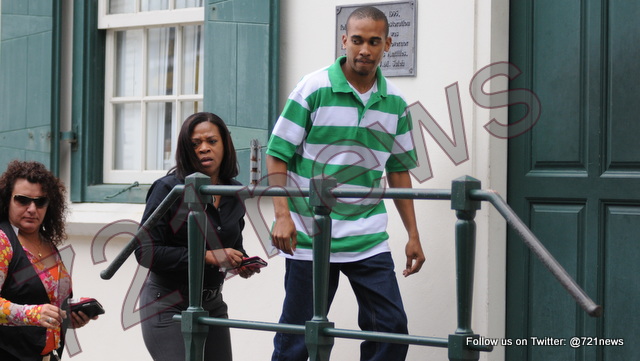 GREAT BAY – The courtroom filled up with colleagues and sympathizers of police officer Richmel Michel Patrick Y. yesterday morning. “I support Officer Richmel York” was the text on the back of many tee shirts that carried an image of the defendant on the front. When Y. was brought to his chair, the police officer that accompanied him, gave him a reassuring tap on his shoulder.

The supporters must have left somewhat disappointed after the court denied the request to terminate or suspend the defendant’s pre-trial detention. Y., currently detained in Aruba for his own safety, will return to court for his trial on October 28. He has been detained since May 17. On March 4, he shot Akeem Isidora to death during a confrontation in Belvedere.

At the beginning of the pro forma hearing, prosecutor gonad van der Wulp asked the court to move the trial to October 28 because the investigation’s dossier is not ready yet.

Attorney Sharia Bommel wants to hear one more witness a d noted that two additional witnesses had recently been heard by the National Detective Agency. It is possible that the defense wants to hear this witnesses before the trial as well.

Bommel asked the court to terminate or otherwise suspend her client’s pre-trial detention. “He his in detention since May 17 and it is sufficiently plausible that this is a case of self-defense,” she said. “At the trial it is likely that all charges will be dropped.”

The attorney said that several witness statements show that her client was threatened by the victim. “His own mother said that her son and his crew were present,” she said, “It cannot be excluded that junior, the victim’s brother, was there holding an axe. My client’s car was surrounded by the crew and Junior and the victim behaved in a threatening manner.”

Bommel said that shots had been fired at her client as well. She also noted that her client had not been arrested immediately. “Apparently the legal order was not shocked on March 4. How can this then be the case six months later?”

Bommel said that her client is punished twice, because he has been transferred to Aruba, while all his family lives in St. Maarten. “He gets no family visits,” the attorney said, adding that back in January the court had no problem to suspend the pre-trial detention of a murder suspect.

Prosecutor Gonda van der Wulp told the court that it is insufficiently clear whether this is a case of self-defense.  “There were problems between the victim and the defendant earlier that day,” she said. He went to show the victim his service weapon, saying, one of these is for you. The defendant also had sufficient opportunity to drive away from the situation. And in spite of the threatening situation, the doors of his car were not locked.” It seems that the defendant was out for a confrontation.”

The prosecutor said that her office had been careful with the defendant’s arrest. “He is a policeman and arresting someone like that takes quite some doing. “First we carefully investigated and only when we found insufficient evidence for self-defense we arrested him.”

With this statement, the prosecution countered Bommel’s argument about the shocked public order. Van der Wulp asked the court to deny the requests for terminating or suspending the defendant’s pre-trial detention.

Judge Yvonne van Wersch took her lunch break to think about the requests. Because the defendant’s return to Aruba was planned for 3 p.m., she took a decision before that time.

The defendant shot Akeem Isidora during a confrontation in Hope Estate, Belvedere. Isidora was involved in a stabbing in 2010 that left 22-year old Otmar Leonard dread. Facing ten years in prison for the stabbing the court acquitted Isidora, who was 17 at the time, of the crime in 2011.