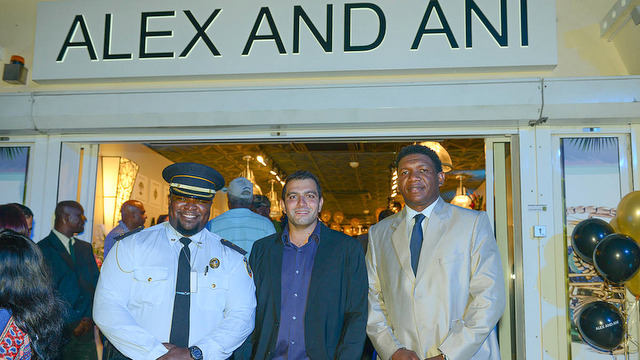 “Knowing the right intentions of this foundation, the namesake of a very brave and selfless man, we wanted to commemorate our opening with a show of support towards the community” said management of ALEX and ANI.

The Gamali Benjamin Foundation, is a newly formed organization aimed at providing help and support to all uniformed service personnel (police, VKS, Immigration, Coastguard, Firemen, Customs, Prison Guards and Ambulance) and their families if they are injured or killed in the line of duty.  The foundation’s board currently consists of Nikhil Kukreja, Inspector Rensley Henson, Alfred Leito, Paul Ellinger and Alston Lourens.

“We are very thankful to ALEX and ANI for their contribution to this fund even at this early stage of the foundation, support towards this organization has been very forthcoming especially from the uniformed services themselves. We hope to be able to fill in the gaps in taking care of the people who put their lives on the line everyday to make sure we all are safe” said Nikhil Kukreja.

The Gamali Benjamin Foundation is named after fallen sergeant Gamali ‘Benji’ Benjamin who was fatally shot in the line of duty while attending to an alarm of an armed robbery on frontstreet, very close to the location of ALEX and ANI.  More information about the foundation and their activities will be forthcoming in the near future.

(Caption LtoR Board Members of the Gamali Benjamin Foundation Inspector Rensley Henson, Nikhil Kukreja and Alston Lourens in front of ALEX and ANI) picture by bestway.fr