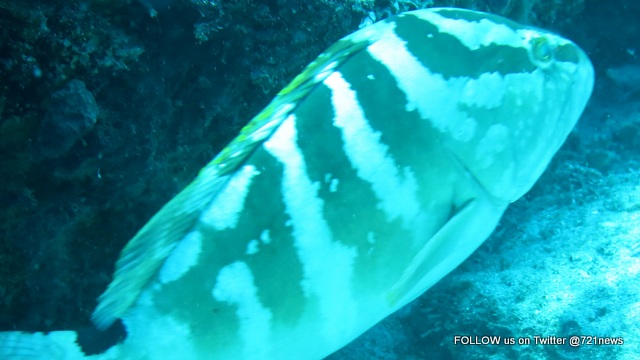 Philipsburg, Sint Maarten –– The Sint Maarten Nature Foundation during various research dives has noticed an increase in Nassau Grouper, a once critically endangered species and one considered almost extinct in Sint Maarten waters, in the Man of War Shoal Marine Protected Area. The Nassau Grouper (Epinephelus striatus) is a large fish that inhabits reef ecosystems. As is typical of groupers, it has a robust, elongated body, rounded fins and big lips. Its overall color is pale tan for fish found in shallow areas and pinkish red for fish found in deeper waters.

“The fact that during research dives within the Marine Park we have noticed an increase in Nassau Grouper is good news for us and shows that our conservation methods are having some slow success in bringing the species back from the brink of disappearing from our waters,” commented Tadzio Bervoets of the Sint Maarten Nature Foundation.

Nassau Groupers were once plentiful and an important source of food within the Caribbean region, but populations are estimated to have declined by approximately 90% in the waters surrounding Sint Maarten due to overfishing and habitat loss. Nassau groupers inhabit shallow to mid-range coral reefs (typically between 6 and 30 meters) and rocky areas where they can hide in crevices; juveniles are commonly found in seagrass beds. Both coral reefs and seagrass beds have suffered much degradation within the past few decades.

“Although we were happy to see an increase in the number of this very important keystone species they are in no means as abundant as they used to be and still are under serious threat of disappearing from our waters forever. That is why it is very important that we maintain the Marine Park as an area closed to fishing so that fish stocks have an area to regenerate without having any pressure from humans. Eventually fish populations will spillover from the Marine Park and repopulate the territorial waters of the country,” concluded Bervoets.