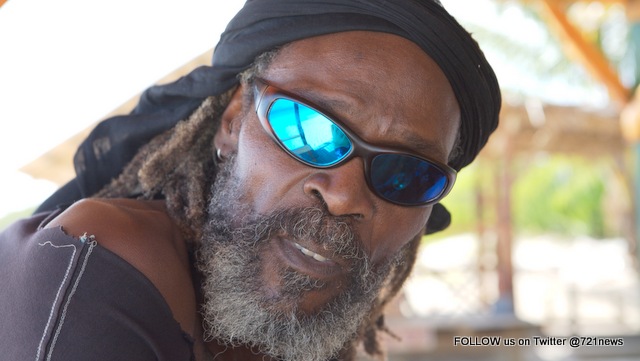 GREAT BAY, St. Martin (September 28, 2015)—Bankie Banx was born Clement Ashley Banks in Anguilla in 1953. His childhood was spent in his native land and on the neighboring island of St. Martin—where Banx has remained in the popular imagination since his first reggae hit single, Prince of Darkness (1977).

From age 10, when Bankie “built his own guitar,”1 to his stint with the Rolling Tones, a popular 1980s band in St. Martin, it should have been clear that there was a poet in the aspiring musician. While he is widely known for his music and unique singing voice, the international recording star is generally not thought of as a writer of verse. But Bankie Banx is arguably one of Anguilla’s accomplished poets.

In an interview with House of Nehesi Publishers (HNP), Banx said that he had long been a student of poetry, reading and writing verse since he was a teenager. when the singer talks about his songwriting process, one can get the impression that some of his songs were first written as poems. Banx composed ten of the twelve songs on his Just Cool (2012) CD album.

Banx’s debut album Roots and Herbs (1978) with The Roots and Herbs band quickly followed Prince of Darkness, making the Anguillian artist an instant reggae brand pioneer in the Eastern Caribbean. His rising star beginnings landed him a Reggae Sunsplash performance in Jamaica in 1983. Banx and his band toured the Caribbean and Europe for three years; in 1987 The Roots and Herbs disbanded. He went on to collaborate with Junior Jazz, Robert Manos, Robert Mansfield, and other musicians in the USA in the late 1980s.

Banx has recorded with Bob Dylan,2 the influential American singer-songwriter; had his music on the Southie film soundtrack (1999) and his first Sunsplash performance featured in Cool Runnings–The Reggae Movie (2005); appeared on the Today Show, Good Morning America, and other US TV programs; and by his tenth album (Just Cool), Bankie Banx had achieved a legendary musical status. Songs such as “Inspector” (1979), “Down on the Corner” (1984), “Busted in Barbados” (1999), and “Big Chief” (2003) express artistic ranges of his experiences and worldview, from humorous double entendre to his notion of when it is “captivity not democracy”3 that people are being subjected to in their society.

The story of Bankie Banx is not only in his songs and travel adventures. A cornerstone of his life and career changes is the Moonsplash Music Festival, founded by Banx in Anguilla in 1991. One of the region’s unique festivals, known for harboring high ranking Wall Street types among its throngs of music pilgrims, Moonsplash is held annually at a beachfront encampment, on the grounds of the Dune Preserve, Bankie’s own bar.4

There’s an aspect about the Dune and the festival that is said to be chronicled in “Still in Paradise” (1999), about how “in 1994 Bankie put the pieces of his life back together” and how “his career in music was almost stolen.”5 At home in his Caribbean, between producing music and the Moonsplash concerts, Banx is not just cooling out at the beach and taking an occasional yacht cruise along the region’s chain of islands. One of the ways that Banx “gives back” to his nation is with Project Stingray, a music and arts education program. The youth-oriented project was founded in Anguilla in 2005. That year he raised funds for the program on his USA tour. Here’s how the philanthropy of the artist is recorded at wikipedia.com: “Through his fund-raising efforts, Bankie was able to donate 30 brand new guitars to the Stingray Program during the Cultural and Arts Fair at Moonsplash 2006.” Furthermore, “During a Jimmy Buffett charity event hosted by Bankie Banx at The Dune Preserve, Bankie raised over one hundred thousand for local charities.”

The music out of which rises Banx’s hauntingly throaty voice may suggest to some a lyrical and stylistic link between him and Bob Dylan and Bob Marley. But Bankie Banx is a certified original. His music is eclectic, a syncretism of reggae, R&B, jazz, Eastern Caribbean string and horn subtleties, and North American urban folk. His poems in Where I See the Sun–Contemporary Poetry in Anguilla (2015), like the lyrics of some of his noted songs, are more of a prophetic and revolutionary kind. “I sing about the Revolution all of the time,” he said during the HNP interview.

The news in early 2015 about the song and verse writings of Bankie Banx might have had something to do with the awards and honors he received this year. In early February it was reported that his poetry would be published for the first time in a book of Anguillian verse.6 Word also got out that Banx would be honored at the 13th annual St. Martin literary festival. In April, the Anguillian government decided that the island’s famous son would be a recipient of the 48th annual Anguilla Day award on June 1 (the book with his poems was launched in Anguilla on may 21).

On June 6, Bankie Banx received the Presidents Award from the St. Martin Book Fair,7 where he was a guest artist (previous awardees include literary giants George Lamming and Kamau Brathwaite and West Papuan folk singer and freedom fighter Benny Wenda).