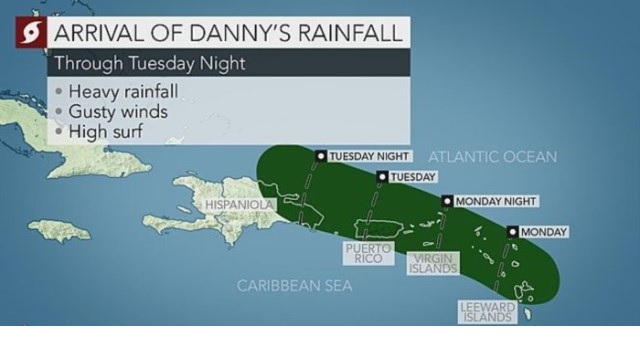 ST JOHN’S, Antigua, Aug 23 2015 – With Danny weakening and still approaching the northern Caribbean Islands, it may be “just what the doctor ordered” for the drought-stricken region.

As of 5 p.m. EDT Sunday, Danny remained a tropical storm and was located about 165 miles east of Guadeloupe.

Stronger wind shear and drier air continues to force Danny to weaken from the Category 3/major hurricane status it achieved on Friday.

Further weakening will cause Danny to be a minimal tropical storm or weakening to a tropical depression as it reaches the Leeward Islands on Monday.

Bands of locally heavy rain and some gusty winds associated with Danny will reach the Virgin Islands and Puerto Rico on Monday night into Tuesday and then Hispaniola later on Tuesday into Wednesday.

A general 2 to 4 inches (50 to 100 mm) will fall along Danny’s path with the heaviest and potentially locally higher amounts occurring north and east of Danny’s center. Isolated flash flooding and mudslides may result.

Wind gusts will average 40 to 60 mph (65 to 95 kph) with the strongest gusts set to whip the northern Leeward Islands on Monday.

The status of Danny later this week and any future impacts to the United States will be determined by its track across the northern Caribbean.

Danny could get shredded apart by the mountains of Puerto Rico and Hispaniola too much to bring anything more than enhanced showers to the Bahamas later in the week. If Danny survives the journey past Hispaniola, wind shear could slacken enough for Danny to gain some strengthen and increase the impacts to the Bahamas.