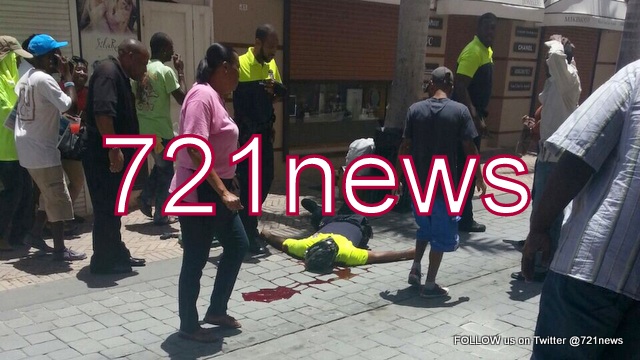 PHILIPSBURG, St. Maarten — An officer belonging to the bike patrol of the St. Maarten Police Force is now in hospital fighting for his life.The officer was shot on Wednesday afternoon at around 1:15pm when he intercepted a robbery of a front street jewelry store Oro Diamandte.

We have also learnt that the store that was robbed on Wednesday was the same store where a robbery attempt was conducted last week. Two of the suspects were arrested by the police.

There were two robbers, one carried out the robbery and the other was said to be waiting on a getaway motorbike which can be see in one of the pictures below.

The officer Benjamin, was said to have been struck by a hail of bullets with at least one striking him in the upper left side of his back, another in his neck and of which the bullet is now lodged in his head and another in his leg.

He was not wearing a bullet proof vest at the time of the shooting. Wednesday’s shooting took place in the vicinity of the Parliament building of St. Maarten.

We have also learnt that officers attached to the bike patrol have not been issued a vest. The officer lost a lot of blood before he was rushed to the St. Maarten Medical Center by Ambulance.

One robber was also detained by the authorities after he too received medical attention  by a second crime scene at the old Fire Station in Town.

Our sources are also telling us that one of the robbers was shot three times by police and is being treated at the St. Maarten Medical Center. His condition is said to be stable. It is said that he was shot in his belly, hand and foot. The second robber remains on the loose.

The robber is said to be a local young man and is known by the police, an indication that the police is also aware of the possible whereabouts of the second robber.

A large scale investigation has been launched by the police.

Officer Gamali Benjamin is still alive and being treated at the SMMC. It is said that he has been stabilized and his bleeding stopped.

However he remains in a critical state as efforts are now being made to fly him off island to receive further medical care.

In the meantime, the Ministry of Justice and the Police Force of St. Maarten is asking the public to keep them in their prayers.

VIDEO AND MORE PHOTOS…. WILL BE UPLOADED IN A FEW MINUTES !!!! 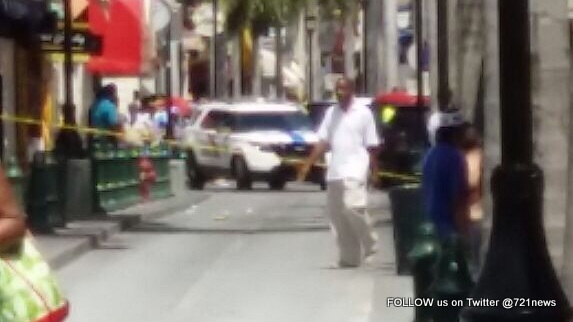