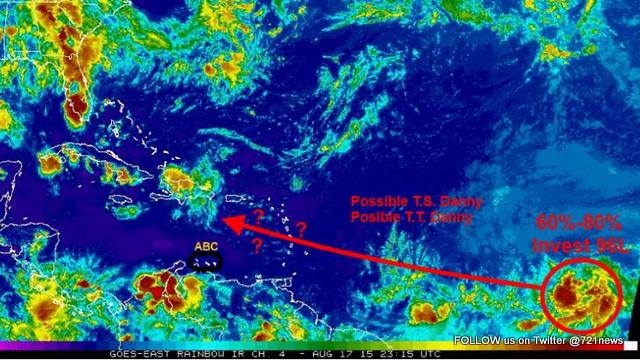 A tropical wave with an associated area of low pressure is gradually developing over the eastern side of the Atlantic basin.

Conditions are favorable for further development as wind shear is low, the water temperatures area high and the air is moist.

The system will be moving generally to the west at around 15 mph and is expected to turn to the west-northwest when it gets closer to the Lesser Antilles.

The question remains if the system will survive its entrance to the Caribbean, as some models doubt that due to dry air and higher wind shear.

Others even show a scenario of a hurricane moving into the Caribbean and then over the northern Caribbean.

This is yet too far to confirm.

The system has a 80% chance to develop into a tropical depression and later the tropical storm Danny in 5 days. The system could already form within the next 48 hours. Right now, models do not show a scenario of the system affecting directly the ABC Islands.