System in the Atlantic Trying to Organize

The Atlantic Basin has been quiet for more than a month, but a disturbance in the eastern Atlantic will attempt to end the tropical drought this week.

AccuWeather meteorologists are keeping a close eye on a tropical wave several hundred miles southwest of the Cape Verde Islands for potential development.

The system is moving through an environment where the is sufficiently warm to support development and disruptive wind shear is lacking.

“The biggest concern [as to whether the system can develop] is dry air,” stated AccuWeather Meteorologist Steve Travis. 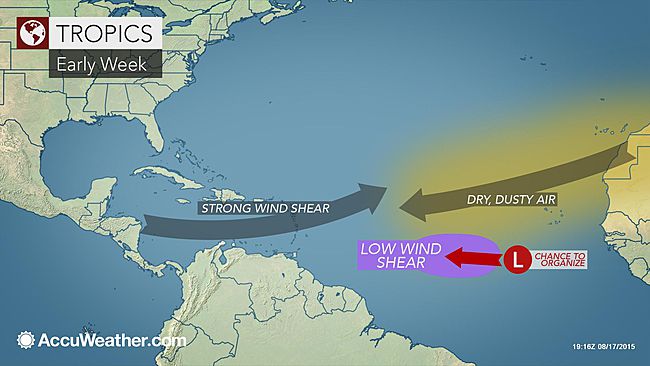 As seen frequently this tropical season, dry air inhibits tropical development by putting a lid on thunderstorm activity. The combination of dry, dusty air and strong wind shear is the reason the Atlantic Basin has been without a named tropical system in more than a month.

“If the dry air fails to keep pushing southward, there is a window when the system could strengthen,” stated Travis. The next named tropical storm in the Atlantic could acquire the name “Danny.”

The system will battle the dry air as it moves westward across the open waters of the Atlantic Ocean. If development occurs, only shipping interests could be impacted.

If the system survives the journey across the Atlantic and reaches the Lesser Antilles this weekend or early next week, AccuWeather Meteorologist Eric Leister states the system may not be faced with the same obstacle other systems moving into this area have encountered.

“Wind shear may not be as strong as it has been across the eastern Caribbean by the time the system arrives,” Leister said.

Anyone with interests in the eastern Atlantic and Caribbean should continue to monitor the progress of this low for updates to any future impacts.

While the prospect of damaging winds and flooding would like to be avoided, the Caribbean Islands are in need of soaking rain from tropical systems to combat the ongoing drought.

The drought has reached such extreme levels that officials have been forced to government officials to enact water rationing programs on Puerto Rico.