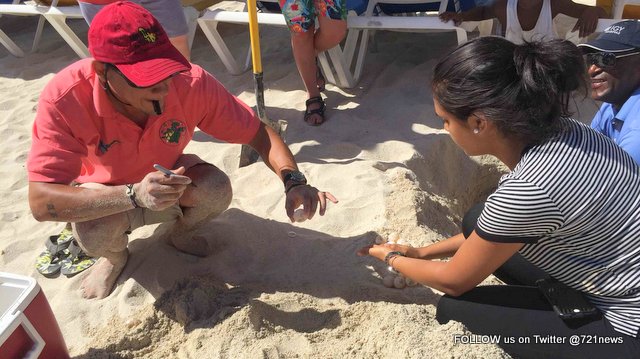 PHILIPSBURG, Sint Maarten –– The St. Maarten Nature Foundation was alerted to a Green Sea Turtle (Chelonia mydas) nesting on Great Bay Beach early on Monday morning. Upon arrival at the location it was found that the turtle nested in an unsuitable location in the sand on Great Bay beach and it was decided to relocate the nest in order to protect the fragile eggs. Because the risk of beach umbrellas puncturing the eggs and because the nest was lain close to the water making it susceptible to storm surge the Foundation decided to move the nest.

The previous two times nests were relocated the Nature Foundation used Guana Bay, but because of the high volume of sargassum seaweed it was decided to relocate the nest to Simpson Bay Beach instead. The nest was excavated and quickly removed to a quieter beach in order to avoid undue stress to the 148 eggs. The Nature Foundation, as designated focal point for Sea Turtle Conservation according to the Inter American Sea Turtle Convention, the SPAW Protocol on Endangered Species and Country Representative for the Wider Caribbean Sea Turtle Network has received specialized training in Sea Turtle conservation, including in relocating turtle nests that are in danger due to human activities or natural events such as storm surge.

Sea turtle population numbers have plummeted to dangerously low numbers throughout the past century due to human impacts, bringing many species close to extinction and causing them to be listed as critically endangered. In order to reverse this trend, all sea turtle species are now protected by international laws and treaties as well as local laws. Based on ARTICLE 16 and 17 of the Nature Conservation Ordinance St. Maarten it is illegal to kill, wound, capture, pick-up, have animals that belong to a protected animal species, to directly or indirectly disturb their environment resulting in a physical threat or damage to the fauna or to commit other acts which result in disturbance of the animal. It is also forbidden to upset an animal belonging to a protected species, to disturb damage or destroy its nest, lair, or breeding place, as well as to take the nest of such an animal. Also, it is forbidden to pick-up or to destroy the eggs of animals belonging to a protected species, which Sea Turtles are.

The St. Maarten Nature Foundation has been conducting sea turtle conservation on Sint Maarten since 1997, with conservation activities resulting in seven hundred juvenile sea turtles entering the wild last year alone. The foundation not only manages the sea turtle population but also protects their endangered habitat and nesting and foraging grounds in sea grass beds and nesting beaches during sea turtle nesting season.