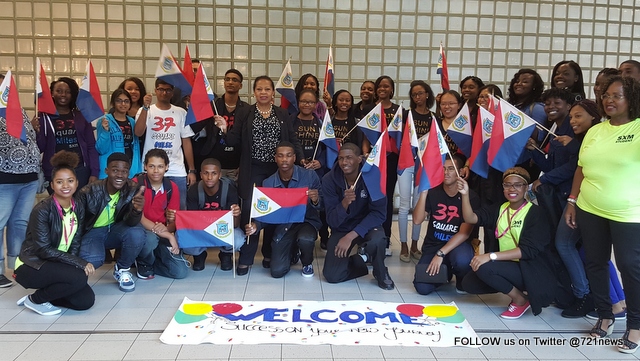 Minister Plenipotentiary Fleming-Artsen along with guidance Counsellors Ellen Rosina and Xaviera MacDonald-Archangel accompanied the 29 students to the Netherlands.

There was a welcome committee and flags were distributed to every student compliments of Sint Maarten Prime Minister Marcel Gumbs.

Before leaving Sint Maarten on Sunday, the students received gifts from the Minister of Education Rita Bourne-Gumbs and a grand party was organised in their honour by the Princess Juliana International Airport.

In addition the firemen as a sign of farewell to the students sprayed the plane with water.

Across from Schiphol the students were treated to breakfast on behalf of the Ministry of Education. The students were welcomed by Minister Plenipotentiary Fleming-Artsen who spoke encouraging words to the students, reminding them of their mission in the Netherlands, but also enjoying every opportunity to grow while in the country.

By 11.30am on Monday morning all students were picked up and headed to homes.

On Thursday August 6, students will be coming to The Hague at the Babylon Hotel where again the challenges they facing while studying in the Netherlands will be discussed.

“The students were impressed on Monday morning, and that gave me a good feeling of their preparedness for this journey,” Minister Plenipotentiary Josianne Fleming-Artsen said on Monday.