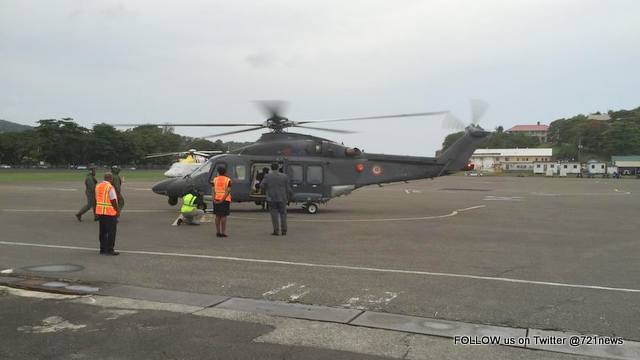 DOMINICA — Prime Minister Roosevelt Skerrit has said that the immediate focus of the government following the devastating passage of Tropical Storm Erika, is on search and rescue efforts in the Petite Savanne area.

“All efforts are being placed on every person who’s missing,” the Prime Minister, who returned by helicopter from St. Lucia on Thursday evening, said in a live statement on DBS Radio.

There have been reports of numerous landslides in the Petite Savanne area with several people reported missing, others hurt and requiring medical attention and it’s difficult to reach them.

Meanwhile the bodies of an elderly man and his two grand daughters from Good Hope who also went missing on Thursday, were recovered near the bus stop in the village.

Others reported missing include two brothers from the Bath Estate area who it is said were swept away by the river, another following a landslide in Castle Bruce.

A recently retired police officer and his wife were seriously injured when their residence, which is located at Castle Comfort, was damaged by a landslide.

It’s a sad day for Dominica as the country grapples with the loss of life, injury and infrastructural damage inflicted by torrential rain from Tropical Storm Erika which pounded the island on Thursday.

In addition to the loss of life, significant infrastructural damage was reported in several areas of the country.

Acting Prime Minister, Rayburn Blackmoore, during a live interview on state-owned DBS Radio, advised persons to “stay home” until it’s safe for them to move from one point to another.

He said the ministry will put necessary measures in place to ensure that roads are cleared following major blockages.

“This took us by surprise…it is really terrible,” he said.

“No need to be out of your homes,” he stated, stressing  that people should protect their lives first and property will come after.

Both Blackmore and Linton highlighted the need for Dominicans to put their differences aside and work together to rebuild the country.

Dominica News Online (DNO) understands that the road linking Pichlen to Grandbay has been cut off.

A lot of landslides and fallen rocks have been reported under the Canefield cliff, the Auto Trade area experienced severe floods. A number of vehicles on the compound of the business place are under water.

The Roseau River overflowed its banks causing major flooding in the City and a significant portion of the building housing the Berean Christian Academy which is located opposite the river, was washed away.

The two major telecommunications companies on the island both reported that they were working feverishly to restore service to affected areas and so was DOMLEC as a significant section of the island was without electricity for most of the day.

Prime Minister Skerrit an earlier announcement by Cabinet Secretary Steve Ferrol that public officers were not required to report to work on Friday.

“But do not stay at home and watch television, go and get involved in doing something in your community” he warned.