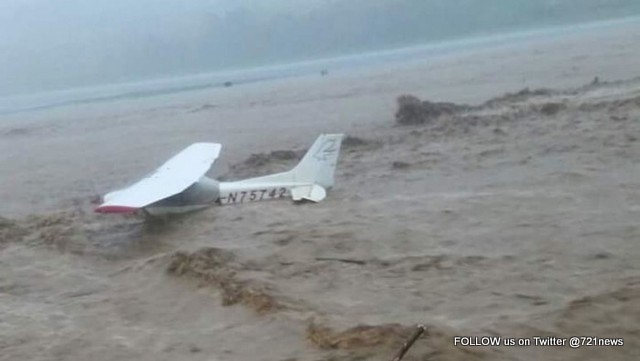 ROSEAU, Dominica, Aug 28 2015 – The Dominica Broadcasting Service (DBS) is reporting that four people were swept away as rivers overflowed their banks due to downpour associated with Tropical Storm Erika.

“I am appealing to citizens to stay indoors and to avoid going sightseeing until further notice. Let us conserve our energies and prepare our minds for the work that is ahead. Let the police and essential services carry out their functions. Going out is placing yourself at risk! Please, please, please stay indoors,” he said.

In Antigua, residents were told to remain home based on information from the meteorological office.

“We are advised to close business today and so we are asking for business owners, employees, government workers (that) they not report to work,” said Samantha Marshall, the Minister responsible for national disasters.

Government officers in St Kitts-Nevis have also been closed based on advice from the National Emergency Management Agency (NEMA).

“Residents of the Federation should remain indoors until the passage of Tropical Storm Erika.  Consequently Government Offices will be closed until it is considered safe to venture out.”

The Met Office has advised that there is a possibility for flash flooding particularly in St. Kitts. “We’re going to be seeing are periods of rainfall where some of the showers are going to be moderate to heavy at times in intensity,” said Senior Met Officer Elmo Burke

Tropical Storm conditions are expected to continue over portions of the Leeward Islands on Thursday.

Erika is moving toward the west near 16 miles per hour and a turn towards the west northwest is forecast for later in the day on Thursday.