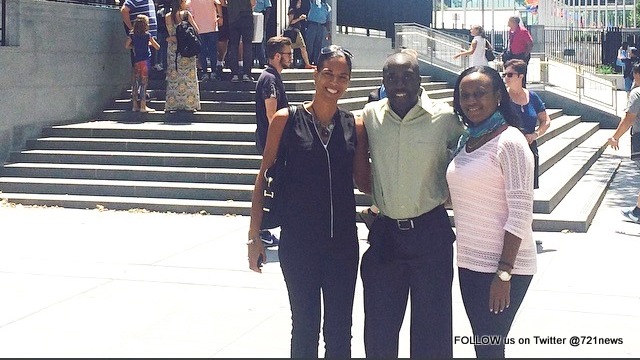 The database has also been updated and now will be able to process 199 indicators pertaining to Human Development from 10 different sources and over 2000 data values.

The aforementioned is essential for country Sint Maarten to have information at its finger tips when it comes to reporting to regional and international institutions about Millennium Development Goals (MDGs) and Sustainable Development Goals (SDGs) which are all related to national human development targets.

Makini Hickinson, Terrance Babtiste, both from the Ministry of Tourism, Economic Affairs, Transport and Telecommunications, Department of Statistics; and Andrea Ortega-Oudhoff, Ministry of General Affairs, Department of the Interior and Kingdom Relations (BAK), were the three civil servants that attended the management lab training.

The training was carried out by Gary Goldman from Community Systems Foundations (CSF) at their offices in New York City. Funding came from the National Development Plan (NDP) project.

A third training is scheduled to take place shortly in Sint Maarten which would allow more civil servants to become administrators allowing them to be able to use the database in their ministry to collate, disseminate and present data based on the tools that the system offers.

It is the intention to launch the first version of the database in October 2015.

The NDP team from the Department of the Interior and Kingdom Relations (BAK), the implementing agency for NDP project, organized the first five-day Basic User and Database Administration Training Workshop that started on June 1.

The Government’s newly developed SintMaartenInfo Database will compile socio-economic data that will help Government policy developers and planners to use evidence based information for policy development which is necessary to implement the NDP.

SintMaartenInfo is a database system that focuses on promoting the use of national statistics in evidence-based policy and planning at global, regional and national level.

The introduction of this database will further consolidate Governments efforts in evidenced based sustainable development planning.  It establishes a national database that enables Government to monitor the developmental progress of the country.

Similar database systems are used by numerous countries for this purpose. The Government of Sint Maarten, in particular the Department of Statistics within the Ministry of Tourism, Economic affairs Transport and Telecommunication and BAK, will oversee the implementation of the SintMaartenInfo database in Sint Maarten.

Only through a process of collecting, digitalizing and confirming data validity is government able to truly measure progress in achieving the policy results that are expected to be accomplished.