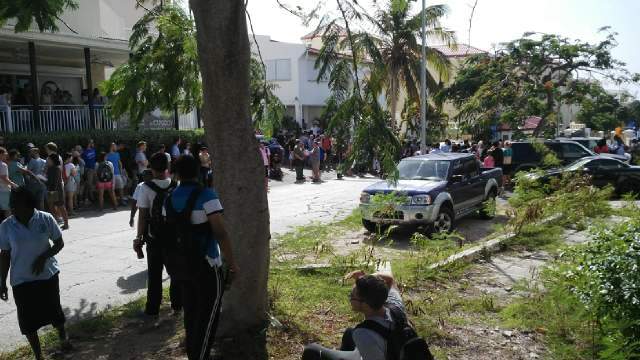 PHILIPSBURG, Sint Maarten – The American University of the Caribbean (AUC) was evacuated on Monday morning.

The compound was evacuated due to a bomb threat that reportedly came in via email.

Police Spokesman Inspector Ricardo Henson told our news room that the bomb squad at 12:30pm concluded their meticulous search of the premises however no explosive device was found.

Henson also confirmed that traffic in the area was diverted as a precautionary measure and that the Fire Department was also mobilized.

On Monday August 31st 2015 at approximately 08.30 a.m. the Police Department received a call from personnel at the American University of the Caribbean located in Coupé-a-Coy reporting a bomb-threat on the premises of that medical school. The personnel at the medical school also stated that the threat was sent via e-mail. The police immediately sent several patrols in the area in order to divert traffic and to assist the school security with the evacuation of the premises and other surrounding buildings. More than 250 persons were evacuated. The fire department and ambulance department were on standby in the immediate vicinity to respond immediately if necessary.

A police search team together with several school security officers did a complete sweep of the all buildings on the premises. The search ended at approximately 12.30 p.m. without the team finding any bomb or any other explosive device. After the “all clear” report was given by the search team, the students, personnel of the school and other persons in the area were allowed back on the premises of the school and to the other buildings in the area. The diversion of traffic was lifted and allowed to flow normally.

The forensic department will be conducting an investigation on the origin of the Email and the persons who are responsible for making this threat. The making of this type of threat, whether fact or fiction is a very serious criminal act and is punishable by law.