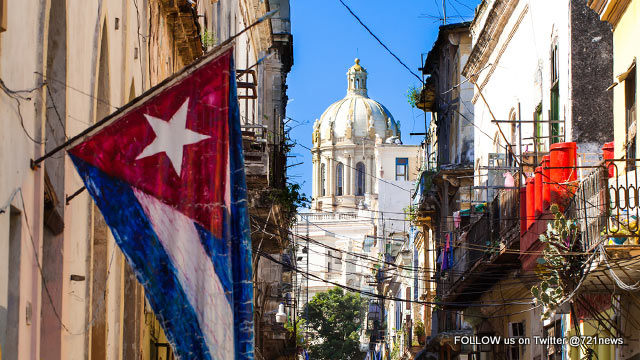 PHILIPSBURG–Central Bank of Curaçao and St. Maarten President economist Emsley Tromp has issued a counter-opinion on the question whether the broader opening up of communist Cuba will have a negative economic effect on St. Maarten and the wider Caribbean.

“I am not sure that Cuba immediately will represent a threat to the Caribbean,” said Tromp on Thursday when asked by the press in St. Maarten about the threat Cuba poses to the tourism-dependent St. Maarten economy with the potential relaxing of decades-old sanctions on the Spanish-speaking Caribbean island by superpower the United States (US).

Tromp was in St. Maarten to present the Bank’s Annual Report 2014.

The further opening up of Cuba “does not represent at this juncture any significant threat for us,” he said.

The country in the region that has justifiable fears is the Bahamas. “I think it represents a bigger threat to the Bahamas, because of the shore distance from the US. Probably the Bahamas will feel that more than the rest of the Caribbean,” Tromp said.

The Bahamas, just 50 miles off Florida, is a favourite weekend destination for travellers from the United States.

“I have been to Cuba. I have lived for a while in Puerto Rico. I have been to the Dominican Republic. The three are practically the same. So probably it will represent a challenge to those bigger economies rather than those farther down South.”

Cuba, once the gaming and entertainment destination of the Caribbean in the 1950s and 1960s, is opening up to a world that has moved on, said Tromp. Cuba now has competition, with Las Vegas and Atlantic City in the US filling the void over the years.

For as long as the US sanctions have been in place, Caribbean countries heavily dependent on tourism have feared Cuba’s return to vie for their main source market – the US. That fear has been reaching fevered peaks in the past months.

More recently, the announcement by Carnival Corporation that it has won US approval to operate cruises to Cuba and plans to start taking travellers there on weekly seven-day voyages from Miami in May 2016 has caused much ado in the community. Tromp pointed out that Cuba has had cruise and stay-over tourism, receiving well over 2,000,000 visitors per year.

The opening of the island nation also brings with it pitfalls. “Remember that Cuba is mired by a lot of uncertainty. There are a lot of legal issues there. A lot of the owners of property are still living in Miami waiting for Fidel [Castro – Ed.] to die and to go there and claim their property. So there will be a lot of legal battles and uncertainties.”

Tromp said we “may even see a setback” caused by property disputes resulting from the current Cuban Government giving out land to investors while the same lands may be claimed by now-absentee or -exiled owners. “There may be a lot of claims on the same properties,” he said.

As worry about Cuba causing economic woes elsewhere grows, Tromp reminded, “When the Iron Curtain fell there was also that concern. Eastern Europe would suck all the investments from Western Europe. We haven’t seen that materialise as yet.”