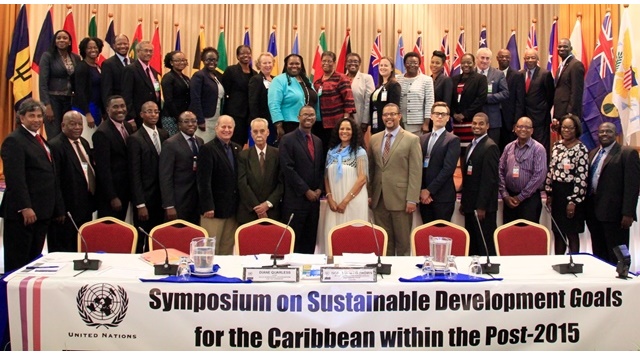 GREAT BAY, Sint Maarten (DCOMM) – The Caribbean Development and Cooperation Committee (CDCC) of the Economic Commission for Latin American and the Caribbean (ECLAC) held its 17th meeting recently in Port of Spain, Trinidad & Tobago.  The symposium was considered a success.  It was related to Sustainable Development Goals (SDGs) for the Caribbean.

The SDG’s (the Post 2015 development agenda) are the future Millennium Development Goals (MDG’s). During the CDCC 17th meeting of the monitoring Committee, the key outcomes of that symposium were endorsed by the Committee.

The CDCC was created as a permanent subsidiary body to function within the structure of the Commission and promote development cooperation among Caribbean countries.

The conference on ‘Sustainable Development’ was well attended by the ECLAC member states and observers.

Drs. L. Morales, Program Manager at the Department of the Interior and Kingdom Relations (BAK) from the Sint Maarten Ministry of General Affairs participated in the meeting as the only Dutch Kingdom representative.

Financing for Caribbean development and progress in implementation of the 2014-2015 programme of work for the Caribbean, were also discussed.

The CDCC was set-up to promote and strengthen economic and social cooperation and integration among the countries of the Caribbean and with Latin America.

The CDCC will promote common positions and strategies on economic and social issues among Caribbean nations and on their relations with third parties, and to present those positions to international forums and agencies.

The first important step towards ensuring that the Post 2015 development agenda will work for the Caribbean Islands is by identifying from among the 17 goals the ones that will best address the priority development needs of the Caribbean countries.

The commission agreed upon focusing on the first 12 SDG’s. Second step is by agreeing to put in place the policies, plans and mechanisms that would facilitate the integration of these goals into National Development Plans (NDP) and regional development strategies. Sint Maarten is on its way to realize the NDP and will incorporate the SDG’s in it.