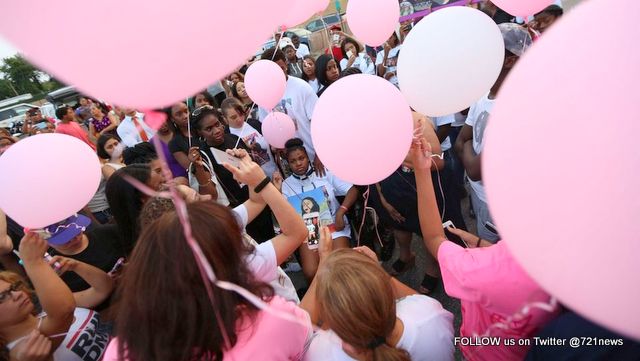 The surviving passenger in the car accident that killed 19-year-old Alize Jorge on Sunday returned to the crash site in New Springville to pay tribute to her best friend during a vigil.

STATEN ISLAND, N.Y. — A grand jury is hearing evidence in the case against the unlicensed driver, who police say, was involved in a single-car collision Sunday night in New Springville that killed one teenage passenger and seriously injured another, a prosecutor said in court Thursday.

Palladino said other charges are possible.

Palladino made his remarks during a proceeding in state Supreme Court, St. George, where Smith was scheduled to appear to answer charges in two ongoing felony cases – alleged criminal drug sale on July 3, 2013, and allegedly leaving the scene of an incident involving injury on June 16, 2014.

The city Corrections Department did not produce Smith, and the two original felony cases were adjourned to Aug. 19

In the meantime, Smith is scheduled to appear Friday in Stapleton Criminal Court on the latest case, as well as a Feb. 17 incident in which he’s also accused of leaving a crash scene.

If indicted as expected with regard to Sunday’s episode, he would be arraigned Aug. 19 in state Supreme Court, St. George, Palladino told the court.

Officials believe Smith was driving Sunday toward Bulls Head on Richmond Avenue in a 2003 Mitsubishi Eclipse at a high rate of speed when he lost control of the vehicle while attempting to beat a red light at the intersection of Richmond Hill Road around 10:45 p.m.

Another passenger, Porsha Richardson, 18, was ejected from the vehicle and found unconscious on the pavement, but survived with serious injuries, including a fractured neck and broken ribs. She was released from the hospital Wednesday evening.

Smith fled the scene of the gruesome wreck and eventually made his way to Staten Island University Hospital via private means, police allege.

Smith’s lawyer has said his client denies speeding and running the red light.