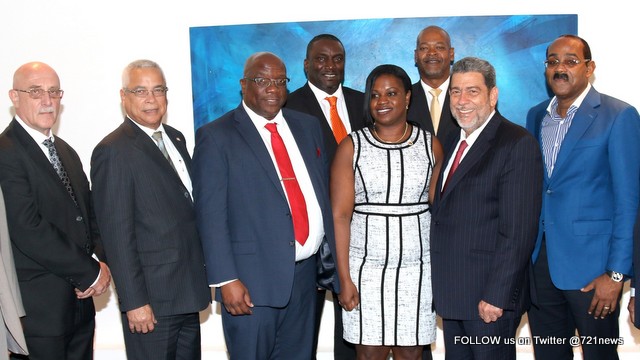 In a ceremony that took place on July 24, Anguilla’s Chief Minister Victor Banks became the chairman which was held by Prime Minister of St. Vincent and the Grenadines Ralph Gonsalves.

On Thursday, at the invitation of the Governor of Anguilla Hon. Christina Scott, Prime Minister Gumbs and the rest of the Sint Maarten delegation attended a reception which allowed the delegation to meet and discuss various issues with leaders from across the Caribbean namely the Prime Ministers of St. Kitts & Nevis, St. Lucia, Antigua & Barbuda and the Chief Ministers of Anguilla and Montserrat.

“These types of engagements are very important.  One of the points discussed was Sint Maarten becoming an associate member of the Caribbean Community (CARICOM).  A technical team will be formalized to explore this process further.

“All of the independent Caribbean countries have seats in the United Nations and can influence as a block along with other countries policies, programs etc.  We had some very good discussions and I look forward to following up on matters of mutual interests,” Prime Minister Hon. Marcel Gumbs said on Sunday.

The ECCB started in 1983 and maintains since then a stable Eastern Caribbean currency.  Countries in the Monetary Council are: Anguilla, Antigua & Barbuda, Dominica, Grenada, Montserrat, St. Kitts & Nevis, St. Lucia, St. Vincent and the Grenadines.