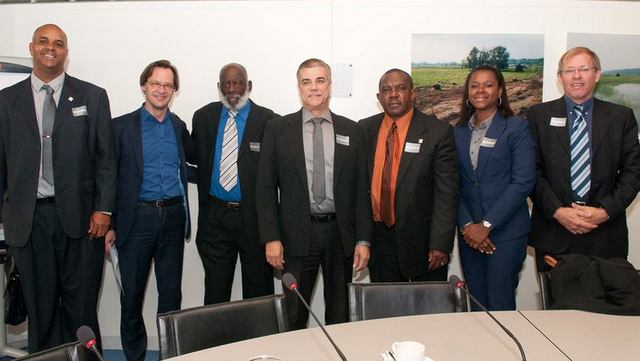 BES ISLANDS –– Recently all members of the Island Council of The Public Entity Saba traveled to the Netherlands to attend a workshop and participate in a congress and met with various Dutch delegations. During this lobbying/study trip the members met with a group of Saban students, met with the Island Councils of both Bonaire and St. Eustatius, attended the year congress of the VNG (association of all municipalities of the Netherlands of which Saba is also a member), lobbied by the second chamber and the Raad van State for Saba’s interests, a meeting with representatives of BZK.

During the two day VNG year congress, attended by more than 2.600 participants, the dialogue regarding the changing role of the democracy in our current society was the main highlight. Especially the presentations of journalists and a history expert regarding the diminishing importance of elections in general were the highlights of the congress.

Both during the meetings with the members of the second chamber and the meeting with the head of the Raad van State, former minister Donner, the council members lobbied unified for the following issues which are high on the agenda of Saba.
It was brought to the attention of the Dutch counterparts that since the constitutional change in 2010, the Saba population pays a double amount of taxes, both on Sint Maarten and on Saba. In light of the fact that double taxation is forbidden by international law, it is according to the elected officials of Saba the responsibility of the Ministry of Finance of The Netherlands to find a solution for this situation. The Island Council members suggested that, until a solution can be reached to get rid of the double taxation, The Netherlands should stop the taxation implemented on Saba until a solution with Sint Maarten is reached. This recommendation as it is the only direct action that the Dutch government can take without needing to relay on partners within the Kingdom at this time.

It was brought to the attention to both institutions that an increase of the property tax is set to be implemented on January first 2016. It was requested from the members of the second chamber that this increase should be halted and kept at the present level until the outcome from the constitutional evaluation is completed and that the recommendations from the evaluation should guide this issue.

During the visit to the office of BZK, the Saban delegation, lobbied to have issue surrounding a gezamelijke rekenkamer addressed after the evaluation as this matter has been tabled with the evaluation committee and the council would like to await the recommendations that will be forthcoming from this study prior to investing and setting up a structure that it deems excessive and with no added value at this time of our transitioning.
The fact that the Dutch law on Saba does not permit to give a rent-alleviation to those in need was brought to the table. The Island

Council members requested to make a special so called ‘doeluitkering’ available till the law in this respect is amended by The Netherlands.
Also the members of both institutions were brought up to speed about the issues of the high water prices on Saba, the level of the old age pension which is below the poverty line and the need for help from the Dutch side to revive the agriculture on Saba.