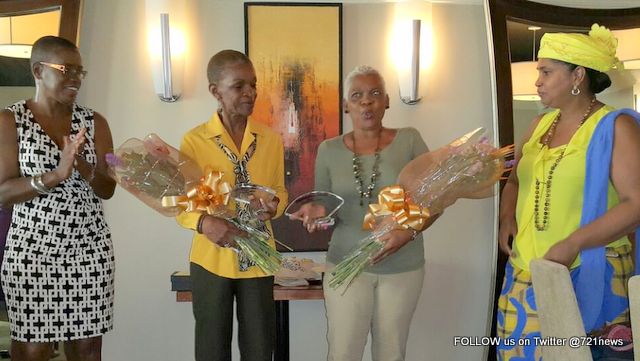 GREAT BAY, Sint Maarten (DCOMM) – Four staff members from the Ministry of Public Health, Social Development and Labour (Ministry VSA) namely, Maria Chemont, Marcella Richardson, Anita Priest, and Irene Serfillia, last week were hailed at a special luncheon in their honour at the Sheer Restaurant to celebrate their years of service in public health to the nation.  Richardson and Chemont were not able to attend the luncheon celebration. All four will be going on pension within short.

Ministry VSA was represented by Secretary General Joy Arnell.  The Acting Minister of Public Health Hon. Rita Bourne-Gumbs was unable to attend the special luncheon, however Arnell who represented the Minister, thanked the four retirees on behalf of the Council of Ministers for their service to country as well as the role they played in the transformation to country in helping to build and tailor make the national public health system for Sint Maarten.

Maria Chemont has worked for Government for 34 years. At the age of 26, in January 1980, she started working for the ambulance department. During her time at the ambulance department Chemont also did her training to become a Licensed Practical Nurse (LPN), for which she had to work double shifts, her ambulance shift and also shifts as LPN in training.

After working 25 years for the Ambulance Service, Chemont joined the section Youth Health Care in January 2005 as LPN. During her work, Chemont managed to complete her training as a Registered Nurse (RN).  From February 2009 and on Chemont worked as a RN for Youth Health Care visiting numerous schools giving a lot of vaccinations, encouraging children and giving lectures about the importance of personal hygiene. She also gave lectures about sexuality.

Marcella Richardson’s inspiration to become a nurse came from taking care of her sick brother at an early age. Richardson also wanted to follow in her mother’s footsteps, who were a specialized nurse. She studied nursing at the Joseph and France General Hospital in St. Kitts.

In Sint Maarten, Richardson’s career was taking care of children at the White and Yellow Cross Foundation. Her passion was for district caring for the elderly and to date she is still taking care of a former client as a volunteer.

Another passion of Richardson is post-natal care, visiting the homes of parents and their new born babies.

Anita Priest, and Irene Serfillia at the luncheon were described as a pillar in the Public Health’s supportive and administrative procedures for the vaccination program and other projects within the Department.

Both ladies started working in Health at a young age. Both started in two different areas. One in finances and the other at the doctor’s clinic based on her wish to be a LPN.

All four ladies were thanked for their contributions to public health.