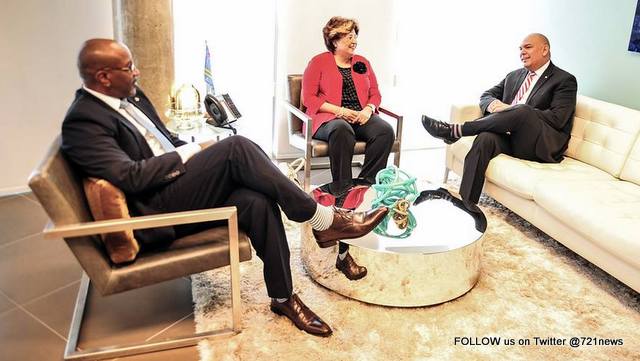 Work groups are to be established by the three countries that will then work on the points of discussion and further formulate them into working documents for further decision-making.  A follow-up meeting is intended before the end of the year where each country will present an agenda with concrete recommendations on moving forward.

Aruban maritime authorities gave a presentation to the three ministers about Aruba’s maritime future and what steps will be taken to stimulate the development of this sector.  One of the areas already established is an “anchorage zone.”  A levy can be charged for vessels anchored in the designated anchorage zone.  While the vessel is at anchor, ship to ship loading of cargo can take place as well as bunkering.  The charges would be administered via the agent of the vessel.

An important agenda point was the establishment of a “Maritime Investigation Committee” based on the Shipping Laws.  The three ministers all agreed to have this committee established jointly supported by all three Kingdom Countries in the interest of efficiency and cooperation.  The tri-partite approach will save each country money while the expertise will be shared.

The airspace between Aruba and Curacao was discussed as well as the Dutch Caribbean Air Navigation Service Provider.

Aruba Minister Oduber highlighted how well the country’s “aircraft registry” has been doing and has offered Sint Maarten and Curacao assistance with establishing their own registries, and the International Air Safety Office, which has been managing Aruba’s registry for the past 20-years, could assist in this process.

Minister Connor proposed to the Aruba Minister that there should be direct airlift between the two countries instead of an airline having to fly via another island.  Minister Oduber said he would discuss this further with the current airlines that service Aruba.

“The meeting with my counterparts from their respective countries was very productive as it concerned areas of mutual interests. We all expressed continuing to work together.  Some discussions have to take place at the Kingdom level where it concerns certain laws in the maritime area.

“The possibilities are limitless.  Some of the countries are advance in some areas, and this is where we can learn from each other about the challenges and come to intelligent solutions rather than re-inventing the wheel.  This will save time, resources and energy. Some of the areas discussed are very beneficial to country Sint Maarten and would bring in additional revenues to the public treasury.

“Government is looking at ways and means of generating additional revenue streams from other economic sector areas rather than burdening the current tax base.  This can only take place by pursuing other areas of economic opportunity for the country.

“My ministry will be working diligently to put the necessary processes in place that would facilitate the development of economic sectors of opportunity,” Minister Hon. Claret Connor said on Sunday.

The meeting of the three ministers was part of a high level political discussion as a result of the first protocol that was signed several years ago to further cooperation between the three countries in aviation and maritime affairs.