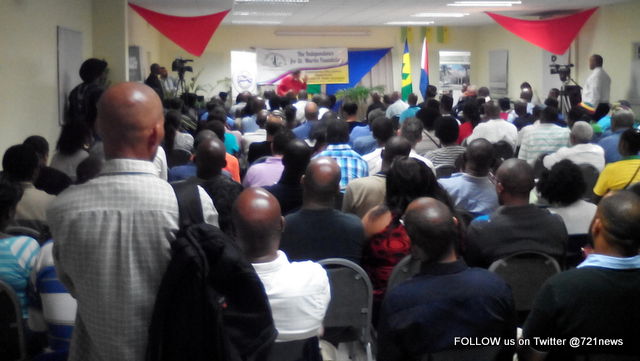 At the meeting hosted by and held at the Caribbean Development Bank in Barbados, the agencies shared updates on the nature and impact of their work, while indicating critical areas and interventions which can enhance their effectiveness.

The Secretary General applauded the region for its contribution and engagement on climate change and affirmed the importance of regional institutions in actively keeping on the front burner, the concerns about the impact on the Caribbean.

“Caribbean countries have to be the champions in raising climate change to the global agenda. I hope you will continue to raise your voice…In spite of the challenges the region is still standing ahead of others; but strong regional institutions are a critical ingredient to this effort,” the Secretary General said.

Dr. William Warren Smith, President of the CDB said Caribbean countries face: “serious structural, economic and social challenges that must be addressed as we build resilience to climate change. We have been relying on a regional approach to address common needs, including capacity building and strengthening of institutions to provide direction and coordination.”

He added that: “substantial climate finance is urgently required. CDB has been emphasising support for the rebuilding of infrastructure to higher standards. However, we could make a more significant contribution to the Region’s efforts in both disaster risk reduction and climate change adaptation, if adequately resourced.”

The Secretary General indicated that there are important developments emerging that can have positively transformational effects on Small Island Developing States (SIDS) and pointed to the Paris Climate Summit in December 2015 as a landmark forum.

“The Post 2015 development agenda will be transformational, people centred and planet friendly. The Paris Climate Summit will be an important opportunity to highlight the region’s concerns. Regional entities’ with a much more focused understanding of the issues will have a very important role in this Summit.  The Samoa pathway process highlighted the key roles that regional entities play in advancing SIDS priorities. UN stands ready to support your organisations and to work in concert to advance the goals and aspirations of the Caribbean region.  We rely on you as the bridge builders between local concerns, regional landscape and international arena,” the Secretary General said.

The Secretary-General was in Barbados from Wednesday, 1 July, to Friday, 3 July, to address the opening of the 36th Summit of the Caribbean Community (CARICOM). During his visit, the Secretary-General opened the Caribbean Sustainable Development High-level Dialogue, which focuses on partnership between the United Nations and CARICOM on the Post-2015 development agenda and climate change.