PHIIPSBURG, St. Maarten– It appears that former Minister of Public Health Maria Buncamper-Molanus and her husband Claudius sold the right of long lease to a parcel of land on Pond Island in 2013 for $345,000 to Sint Maarten Building Supplies (SBS). An extract from the public register of the Cadastre, of which this newspaper obtained a copy, shows that parties inked this deal one-and-a-half year ago, on December 19, 2013.

The excerpt from the Cadastre tallies with charges the Public Prosecutor’s Office has brought against the Buncampers and against SBS-director Ivan H. As charge number 5 on the indictment against Claudius Buncamper, the prosecutor’s office states that the deed of the sale of the right of long lease – dated December 19, 2013, is a forgery.

Prosecutors have brought the same charge against Ivan H. and against former Minister Maria Buncamper-Molanus.

The transaction is remarkable, because in 2008, also on December 19, the Buncampers sold the rights of long lease to the same property for $3 million to the bogus company Eco- Green N.V. This entity was established three days earlier. Its director is, on paper, Theodore Oniel Walters – a retired employee of public works where Claudius Buncamper held sway. In recent years, Walters’ health has deteriorated and it remains to be seen whether he is fit to stand trial in September.

On the day the Buncampers ‘sold’ the right of long lease to Eco-Green, another document was drawn up and the prosecutor’s office says in the indictments against the Buncampers that this too is a forgery.

Eco-Green made on paper a commercial lease agreement with SBS on December 19, 2008, claiming that parties verbally agreed on the contract on February 1, 2005 – at a time when the Buncampers did not even own the long lease and a time when Eco Green did not exist. SBS agreed under this contract to pay $750,000 in non-refundable key money and a monthly rent of $18,750, plus the arrears for this amount from 2005 until December 31, 2008. That period covers 47 months and represents a theoretical value in rent arrears of $881,250.

The Buncampers, Ivan H, Oniel Walters and retired notary Francis Gijsbertha have all been accused by the prosecutor’s office of membership of a criminal organization. They will stand trial after the summer on September 9 and 10. 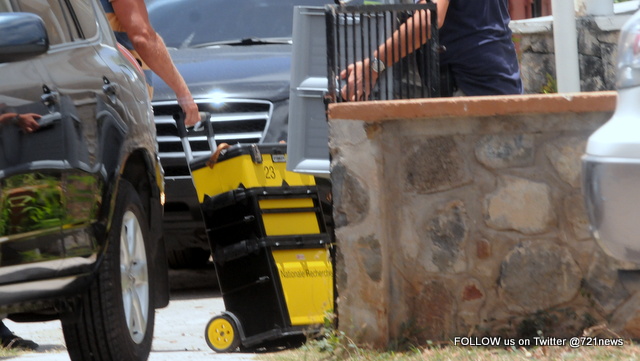