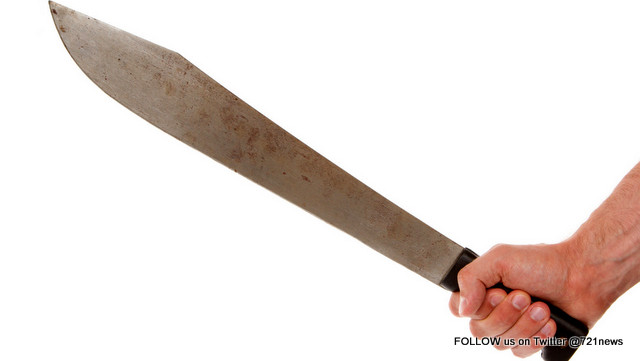 GREAT BAY – Ramon Gumbs claimed self-defense but the Court in First Instance sentenced him for attempted manslaughter to 3 years of imprisonment yesterday morning. The 24-year-old defendant had a beef with a security guard identified in court as Carlos who called him in April on his behavior and on his drug selling-habit.

On May 5 of this year, depending on the course of events people want to believe, either the victim or Gumbs were waiting at a bus stop in Dutch Quarter. Gumbs says that the victim came out of nowhere and attacked him with a machete that he subsequently managed to seize to turn the tables. The victim told investigators that Gumbs was the one to attack him with the machete. He sustained wounds to his head and serious injuries to one of his arms that broke in three places. The victim is still unable to use this arm one hundred percent.

When Carlos called the defendant on his behavior, the latter threatened him and said he was going to rape his wife, Judge Maria Paulides read from the case file.

When Gumbs attacked his victim, the latter defended himself but his attacker causes serious injuries to the arm he used to protect himself. In the meantime, Gumbs had hit his victim already on his head with the machete. The victim spent nine days in hospital for treatment.

The judge said that Gumbs had gone to the victim’s wife and told her to warn her man not to talk about him anymore. Gumbs also told the woman that his victim had a relationship with his girlfriend – a statement he changed later on.

Gumbs claimed that he had thumped the victim in his face when he attacked him with the machete, but the medical report does not show any injuries to the victim’s face.

The court sentenced Gumbs, who lives with his grandparents, to 30 months for armed robbery in December 2012 (with 12 months conditional) and to 9 months in January 2015 for threats and attempted theft. He also still has 120 hours of community service to do.

Prosecutor Nanouk Lemmers said that the defendant had said from the beginning that he had to defend himself against his victim. “We have attempted to investigate this claim by calling a number he indicated on his phone. The lady we called did not want to make a statement and she did not want to be found. We also asked Gerard R. (who was in court on related charges yesterday afternoon) about the situation, but he did not make any statement about self-defense. So this investigation did not yield anything to support the defendant’s claims. Self-defense is therefore not plausible.”

The prosecutor went with the victim’s statement and noted that his injuries were extremely serious. “The defendant says that he did not want to kill his victim, but by hitting him so hard with the machete he consciously accepted the risk that his victim would die.”

Attorney Safira Ibrahim stuck to the self-defense argument, saying that the victim had come out of nowhere with a machete while her client was waiting for a bus.

Gumbs told the court that he had thumped his victim several times in his face before taking the machete away.

Judge Paulides did not believe the story, mainly because the medical report does not show any injuries to the victim’s forehead or other parts of his face.

The judge considered attempted manslaughter proven, and that self-defense and the defendant’s statements were not plausible.