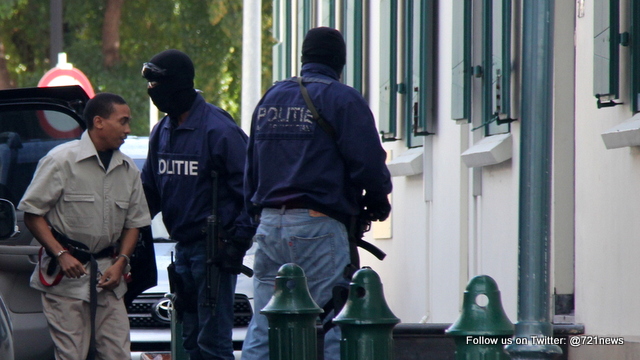 PHILIPSBURG, Sint Maarten — Police officer Richmel York aka Redrum contested the ruling of the Court of First Instance and filled an appeal to suspend his pre-trial detention. Escorted in handcuff by the police SWAT team, the suspect showed up at the courthouse in Philipsburgon Friday afternoon after 4pm. The suspect was involved in shooting and killing Akeem Isadora in March of this year.

The suspended police officer received a 60-day detention from the court and was flown to a detention center named Kia in Aruba, to wait out his trail detention. York was receiving multiple threats at the Point Blanch prison and the Prosecutor Office had to make the call to send the suspect off island for his safety.

New Press Secretary for the Prosecutor Office, Karola van Nie stated on Friday afternoon after the case that “this morning there was a reconstruction of the case and this afternoon there is a hearing behind closed doors of the Court of appeal about the extension of his pretrial detention.

The judge who heard the case will consider all the facts and will give his verdict next week.