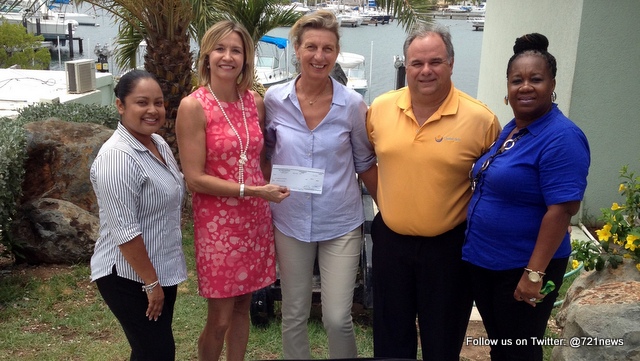 Oysterpond, Sint Maarten — Recently Oysterbay Beach resort (OBBR) owners and managers showed again their support for the DigiKidz Project by donating US$ 5,000 towards the next DigiKidz School. Management said they like this project because everybody can see immediately where the money goes.  The donation is spent directly in the schools and you see the kids in the classroom working with the technology. They see the donation as a great return on investment in the children of St. Maarten, who somehow are all connected through the jobs of the parents, friendships, family relations.

Anne-Marie Brooks, Assistant General Manager explained: “We get many sponsor requests from the community, but this one stood out as it has a snowball effect, where through a single donation everybody learns from each other; kids teach kids, kids go home and teach parents, employees at our resort see that their children are part of this program and in a kind of way we as adults all have young children that we need to support and are responsible for.”

OBBR is no stranger to the DigiKidz project. From its launch in October 2013 Ricardo Perez, general Manager OBBR, and Brooks have given their full support to the project. Perez, being the former manager of a major resort in Anguilla, was already familiar with the work of WIndsong Foundation, who had made large donations towards several educational projects in Anguilla. He was very excited to hear that Windsong was willing to also contribute to St. Maarten education through Foresee’s DigiKidz project and gave his full support. In October 2013 Foresee Foundation launched its DigiKidz project at BeauBeau’s restaurant, sponsored by OBBR.

The donation is part of a comprehensive IT/Technology project to equip St. Maarten schools not only with hardware and software, but also train teachers on how to integrate Technology in the teaching of the FBE curriculum.

Foresee Foundation expressed its sincere thanks to the Owners and Management of Oysterbay Beach resort and promised to keep them updated on the progress of the project.

In the picture from left to right: