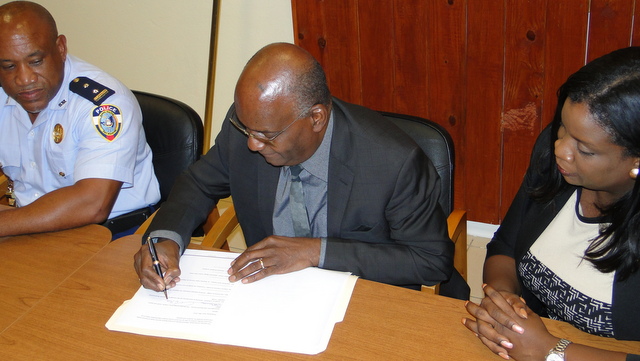 Philipsburg, Sint Maarten — The project for the implementation of the “Student Identification Card” has been on the drawing board for quite a while and has been spearheaded by Inspector Felix Richards the Community Police Officer for the St. Peters, South Reward and surrounding areas. The parties involved put together a committee to make the project a reality. The “Student Identification Card” will be taken up into the school rulebook for every secondary school on the Dutch Side. The ID card will be enable authorities and school management to better monitor the students during school hours and school events.

On Thursday Minister of Education Rita Bourne-Gumbs, Minister of Justice Dennis Richardson and representatives of the School board for secondary education came together at the Philipsburg Police Station for the signing of a Memorandum of Understanding on the soon the implemented “Student Identification Card”.

The introduction of the Student Identification Card is the first phase. The project consist of several phases, according to the police department, one of these stages include the upgrading of bus drivers who drive the school student on a daily basis.  This will create  a new sense of safety and security when travelling to and from the school districts by creating safety and security on the school busses parents will again allow their children the catch the bus to school.

Police Spokesman Ricardo Henson says the plan will be implemented in stages and all stakeholders are happy with the idea of the Cards being used by every secondary student on Dutch St. Maarten.