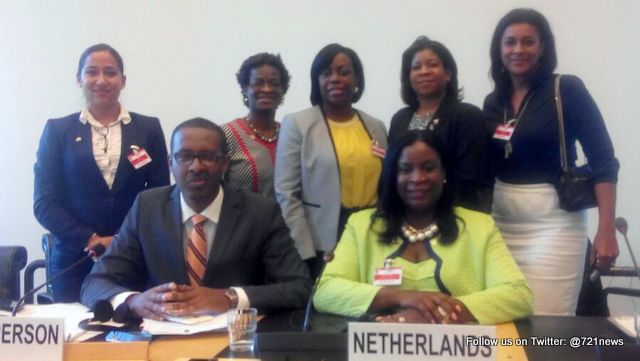 Due to the absence of Dutch State Secretary for Health, Welfare and Sport Hon. Martin van Rijn as delegation leader, Sint Maarten’s Minister of Education, Culture, Youth & Sports Affairs Hon. Rita Bourne-Gumbs, who traveled to Geneva, Switzerland to fulfil the reporting obligations of country Sint Maarten with respect to Children’s Rights, was selected to deliver the opening and closing remarks at the meeting on behalf of the Kingdom.

Minister Bourne-Gumbs as delegation head for country Sint Maarten provided the committee with a synopsis of what the country has achieved such as a separate department for Youth Affairs being established as the leading structure to facilitate the formation of legislation and policies regarding children and youth affairs.

Another key development by Sint Maarten was the amendment to Book 1 of the Civil Code prevented discrimination of children by equating the position of those born out of wedlock with that of legitimate children, while corporal punishment was prohibited in the law.

Minister Bourne-Gumbs also pointed out that Sint Maarten is establishing the Action Plan Children Rights, and had set-up a Children’s Committee for its implementation.

The Civil Code has also been amended and a Centre for Registration of Child Abuse had been set up, while in January 2014, an Inter-Ministerial Working Group had been established to draft a national protocol for child abuse, Minister Hon. Rita Bourne-Gumbs added.

In her concluding remarks, Minister Bourne-Gumbs thanked the committee and said that the Kingdom of the Netherlands would give further thought to ensuring participation and involvement of children in a systematic manner, and that the Kingdom looked forward to receiving the concluding observations and reiterated its commitment to the rights of the child.

The Committee Expert and Country Rapporteur Olga Khazova, stated that despite the progress, there was still room for improvement in the situation of children in the Netherlands, and that one of the concluding observations the Committee would be making would refer to decentralization with the hope that the new system would indeed work for the best interest of the child.

It was encouraging to learn about many positive programmes in the Caribbean countries and municipalities addressing violence against children and domestic violence, and a healthy lifestyle.  Finally, the Committee hoped that the Government would positively consider the ratification of the Optional Protocol to the Convention on a communication procedure.

The Netherlands was represented by the Ministry of Health, Welfare and Sports, Ministry of Security and Justice, Ministry of Interior and Kingdom Relations, and Ministry of Foreign Affairs.