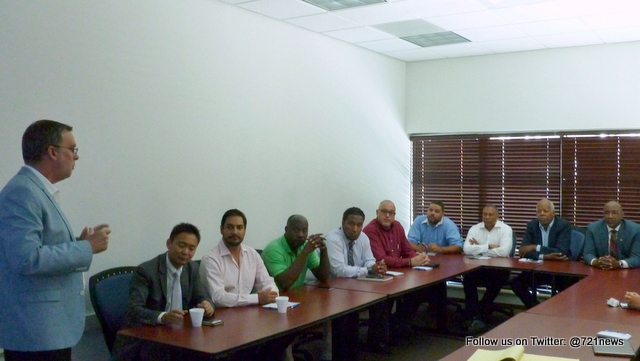 Carty told those in attendance which also included senior UTS staff that this was a historic moment for Sint Maarten as UTS is on the brink of introducing mobile and broadband high speed data for consumers with speed and capacity never experienced before on St. Maarten, adding that the country will have the most modern network on the island with the best quality of service for the end user.

UTS Eastern Caribbean will do its commercial launch of its LTE network during the third quarter of 2015 as soon as BTP-SXM has certified the network.  The LTE network is an investment of Naf.30 million ensuring UTS customers growing demand for data, speed and quality for years to come.  Currently, CEO Glen Carty explained that the company was in the testing phase after fulfilling and meeting all requirements from the national telecommunication’s regulatory body BTP-SXM.

All sites were turned on today, Thursday, June 4, since the LTE infrastructure is in place, and the LTE will remain on during this test phase.

LTE (Long-Term Evolution) has become the fastest developing mobile communications technology ever – LTE era.  LTE is commonly marketed as 4G LTE, which is a standard for wireless communication of high-speed data for mobile phones and data terminals.

Minister of Tourism, Economic Affairs, Transport and Telecommunications Hon. Claret Connor, congratulated Glen Carty and his team at UTS, for this important achievement.

“We need to take advantage of the country’s strategic location in the North and Eastern Caribbean. The key to all development on the island is quality and service and this will move our country forward.

“This new LTE technology will further position us as a country where it concerns stay-over visitors, cruise and that are in transit at the airport, having the best connectivity that technology can offer.  I am very pleased with this development and encourage UTS to continue with its strategic planning that will benefit consumers and the country in the long-term,” Minister Hon. Claret Connor said on Thursday after the presentation.

Anthony Carty, Director, as well as Giovanni King, Chief Operations Officer of BTP-SXM congratulated UTS and its team for having reached this milestone.  King added that BTP-SXM works with all telecommunication providers allowing them to achieve their goals.

“UTS mission is evolving from an infrastructure-driven company to a customer-driven company that offers superior connectivity and access to content through innovative solutions.

“After we launch UTS 4G LTE will automatically become available with no additional charge for all existing UTS customers with 3G service.  UTS Eastern Caribbean is all about connecting you to your world, and with this new evolution, we have a very exciting future ahead for all our customers,” CEO Glen Carty said on Thursday after the presentation.

The UTS Group is one of the Caribbean’s premier, integrated and growing providers of proven telecommunication technology.  It serves consumers, businesses, governments, and other institutions in the Caribbean area, South America, and Europe.

UTS Group has over 90 years of experience, and is considered the market leader and trendsetter in its main markets in long distance and mobile telephony services.

Huawei, founded in 1987, is a global leader of Information Communication Technology (ICT) solutions.  The company’s products and solutions are used in 170 countries and regions.  Huawei is ranked 285th on the Global Fortune 500 based on its revenue in 2013.  In 2014, the company’s revenue reached approximately US$46.5 billion and employs 170,000 people.

BTP-SXM is responsible for the maintenance of a competitive environment in St. Maarten in the industries with which it is tasked to regulate.  BTP-SXM executes its tasks through consultations with industry participants and stakeholders, focused on attaining quality and affordable communications for all working towards establishing an environment that supports the continuous growth and development within the industries.