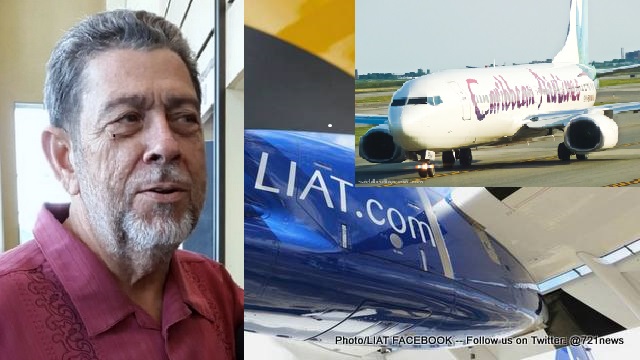 PORT-OF-SPAIN, Trinidad, May 10, 2015 – A merger has been proposed between State-owned Caribbean Airlines Limited (CAL) and Leeward Islands Air Transport (LIAT), whose majority shareholders are Antigua, Barbados and St Vincent and the Grenadines.

The proposal came Wednesday evening from Dr Ralph Gonsalves, Prime Minister of St Vincent and the Grenadines during a High Level Round Table discussion on day two of the “Forum on the Future of the Caribbean” at Hyatt Regency, Port-of-Spain.

“We would have better service in the region, and use that as a base to start to involve Suriname Air, Bahamas Air and so on, and let us have a proper functioning regional airline (that) would inter-link the islands in the region,” Gonsalves declared, much to the delight of the large audience of regional decision-makers.

Making it clear he was speaking in his capacity as Chairman of LIAT’s shareholder governments, the always outspoken Gonsalves said, “I would like to see a serious discussion start between the Government of Trinidad and Tobago; the owner of CAL, and LIAT” about his proposal.

He argued that with LIAT having recently updated its fleet with four 68-seat ATR 72-600s and five 48-seat ATR 42-600s, both of which are turbo-prop planes, “there are possibilities for this merger.”

Gonsalves made the proposal in the presence of Trade Minister Vasant Bharath, who acknowledged both airlines have had their share of financial difficulties before indicating his willingness to discuss the idea further before taking it back to Cabinet for review.

“Clearly, if we are to deepen regional integration with regard to people being able to travel or developing more trade links, then we’re going to have to have greater access to these countries. In many instances, it’s easier (and cheaper),” Bharath said, “to get to Miami and New York than it is to get to some Caribbean countries, which clearly is not ideal for Caribbean travel.”

Declaring the merger proposal “has merit”, he added, “it’s something that we can look at to see if there are synergies that we can utilise.”

“Clearly we have to get past some of the political hurdles, but I would certainly have a look at it and maybe speak to PM Gonsalves in a little bit more detail and it’s something that I’m very happy to take to Cabinet after discussions and consideration,” Bharath stated. (Trinidad Newsday)