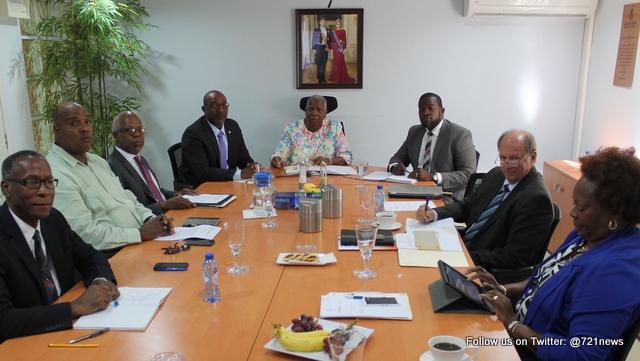 There was a very good and extensive discussion that took place on a number of issues resulting in a working and cooperation methodology where feedback and input would be sought from the Council of Advice on initiative laws thereby foregoing a long tedious process to get legislation approved.

Minister Connor presented his vision and plans related to his ministry. Some of the points discussed include public transportation, tourism, telecommunications and forthcoming legislation.

“We can work more effectively in the execution of both our responsibilities and safeguarding the best interest of our High Council of State, the Constitution and our country,” Minister of TEATT Hon. Claret Connor said over the weekend.
The meeting took place in the conference room at the Council of Advice.

PHOTO CUTLINE: Minister of TEATT Hon. Claret Connor (4th from left) with members of his Cabinet and representatives of the Council of Advice including Vice Chairlady Mavis Brooks-Salmon (4th from right). DCOMM Photo