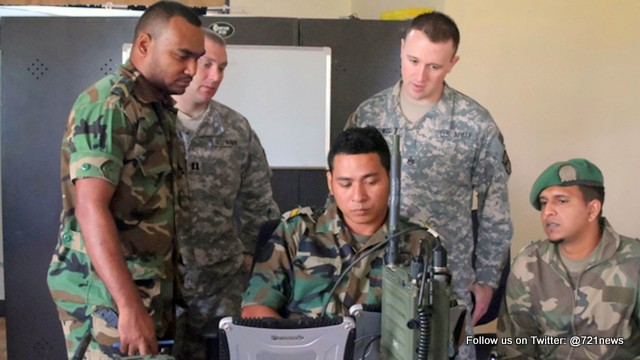 –Three members of the Suriname National Army took part in a series of subject matter expert exchanges with the South Dakota National Guard in April, to share information on best practices for field leadership and the handling of hazardous materials.

The Surinamese army men met with more than a dozen SDNG Soldiers and Airmen in Rapid City, April 14 to 17, to discuss procedures and operations for hazmat, according to a press release from the US embassy. The Suriname soldiers visited several units and facilities and discussed protocols and processes for storing, using and disposing of hazmat.

“We covered storage, recycling programs, and building codes,” said Master Sgt. Dave Lingle, mechanic supervisor/safety officer at CSMS 2. “It used to cost the Guard 25 cents a gallon to get rid of used oil, now we recycle it.”

“Each member has to know what to do with hazmat,” said Lt. Col. Bob Dejong, SDNG supply management officer. “From spill procedures and spill kit use. Spills can end up in the water table very quickly if not properly contained.”

Following the hazmat exchange, three members of the SDNG and 40 members of the Suriname Defense Force conducted an Officer Candidate School field leadership exchange in Suriname, April 22 to 23, focused on troop leading procedures and course instruction.

The SDNG Soldiers observed Suriname’s OCS program and how their cadre and candidates conduct training, use resources, give briefings and prepare for operations.

Heiser said she wants to incorporate some of that thought process into the SDNG OCS program.

The SDNG team also observed plan development and operation order briefings. They were able to see how the Surinamese disseminate information and how they use sand tables to brief their missions.

Heiser said she was impressed by the level of detail in the sand tables along with their efficiency and creativity.

SDNG exchange participants Maj. Steve Sewell and Capt. Chris Long showed the Suriname candidates another way of setting up their teams when briefing an operation order, to help prevent confusion, and made recommendations on briefing tactics.

The exchanges were conducted as a part of the South Dakota-Suriname State Partnership Program.

In coordination with U.S. Southern Command, Suriname and South Dakota established a successful security cooperation relationship in 2006 under the National Guard Bureau’s State Partnership Program. Since then, numerous exchanges have taken place between South Dakota and Suriname to share experiences and best practices in a variety of military training and topics.