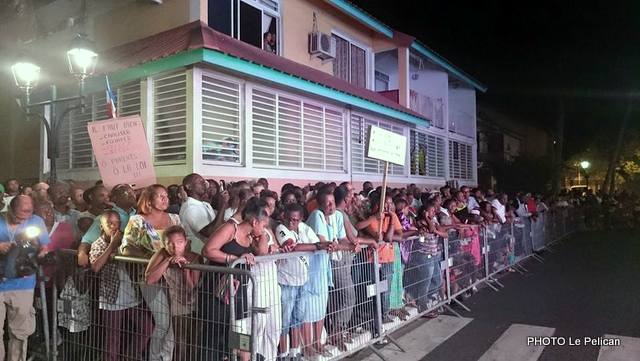 By Robert Lucock /The Daily Herald

MARIGOT, Saint Martin — President of the French Republic François Hollande made a number of sweeping announcements in his speech to the population of St. Martin at the end of his whirlwind visit to St. Martin last night. Among them were assurances that the social benefit (RSA) would be reformed to be more adaptable for St. Martin with help given to pay off the Collectivité’s debt.

He also said a Court of First Instance and a rehabilitation centre for the youth (foyer educatif) would be established, and the number of Gendarmes in the territory would increase this July.

Hollande appeared to be decisive and up to speed on the issues plaguing St. Martin following the meeting with the Territorial Council and a private meeting with President Aline Hanson who also went over the issues the Council wanted to see resolved.

Cheers erupted occasionally from the crowd outside watching the screen when something met their approval.

“I’m not here to write off your debt,” he said referring to the 30-million-euro debt owed to Caisse Allocation Familiale (CAF). “But we can make an easier extended-payment plan to pay this off.”

The creation of a “chambre detaché” of the Tribunal de Grand Instance of Guadeloupe will begin in July, be finished by September and ready to open in January 2016, he stated. Previously, major court cases had to be dealt with in Guadeloupe.

He announced St. Martin will get the long awaited “Code Natif” that will enable Gendarmes to fine motorists for not paying their road tax. When the road tax first was introduced a legal anomaly prevented Gendarmes from issuing fines.

He promised that the State would find a solution to its poor performance in tax recovery, but at the same time said, “Everyone must pay taxes; otherwise, there is no income coming in.”

He encouraged St. Martin, as an Ultra-Peripheral Territory, to present more projects and benefit from the funding Europe gives, and said the State would support these applications.

Also in the welcoming party was the Préfet of Guadeloupe Jacques Billant, as Préfet Philippe Chopin had already left for St. Barths to greet the President there.

Most of the national French press following Hollande’s visit to the French Antilles, some 50 reporters, had arrived a day earlier on a chartered plane.

Back in Marigot a large crowd had gathered behind barriers at Hotel de la Collectivité waiting for President Hollande’s arrival from Grand Case. Several persons were carrying banners welcoming the President to the island.

When the President finally arrived around 7:00pm he delighted the crowd by jumping out of his car and doing a walkabout, shaking hands with the public for a few minutes before entering the garden where he was introduced to each member of the Territorial Council by President Aline Hanson.

Hollande, Hanson and MP Daniel Gibbs laid wreaths at the war memorial to commemorate Fête de la Victoire 1945. A choir of small children from different schools sang the Marseillaise and Sweet St. Martin Land, after which Hollande chatted with the children to thank them.

Hollande was joined for the ceremony by National Assembly President Claude Bartolone and Minister of Overseas Territories George Pau-Langevin.

The crowd had another treat when Hollande walked along the barriers chatting to people before he went into Hotel de la Collectivité for the meeting. Justice Minister Christiane Taubira and Minister of Sustainable Development and Energy Ségolène Royal also greeted the crowd and were mobbed by reporters.

The visit appeared to have gone off very smoothly and Hollande’s disposition was relaxed and affable.