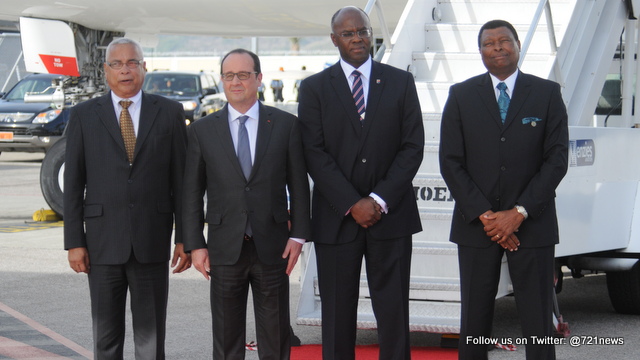 AIRPORT, St. Maarten (May 8, 2015) – French President François Hollande arrived at Princess Juliana International Airport on the Dutch sideFriday afternoon for what can be called a 26-hour day in St. Martin and St. Barths. Hollande is on his first official visit to the island.

The man, who has been president of the French republic since 2012, was greeted at the airport by Governor Eugene Holiday, Prime Minister Marcel Gumbs, President of Parliament Lloyd Richardson and Airport Director Regina Labega as well as French officials. 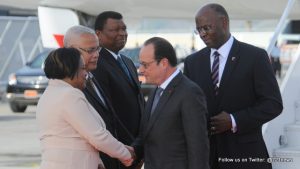 Hollande’s feet only touched the soil of the Dutch side for a brief moment before taking a smaller aircraft to jet over to St. Barths for a visit there.

He will return to the island from St. Barths at the Grand Case Airport later today. He will also visit Martinique.

Hollande is in the Caribbean for a five-day tour that includes trips to Cuba and Haiti. The trip to Cuba after the tour in the French Caribbean will be the first-ever visit by a French leader to that island.

Hollande will be the first French president to visit Cuba since independence in 1898.

He will be accompanied by bosses of companies like Pernod Ricard, Air France and Accor, anxious to profit from the economic effects of the thaw in relations between Washington D.C. and Havana.

France has voted against an embargo on Cuba at the UN since 1991, French officials were anxious to point out on Friday.