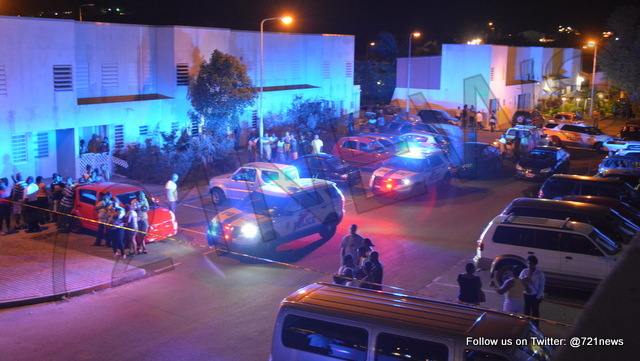 PHILIPSBURG, Sint Maarten – Police officer Richmer “redrum” York is facing justice after being arrested on Sunday Monring by the Dutch Detectives who were investigating the shooting. 22 year old Akeem Isidora was shot by York during a fight in Belvedere on March 4th 2015.  Press Prosecutor T. Kamps confirmed this to 721 Reporters late on Sunday Afternoon. The Prosecutor will charge York with Murder.

Shortly after the incident the officer was suspended with pay by the Police Department.

According to the police report, several police patrols, detectives and paramedics were sent to Happy Estate in Belvedere where a shooting had taken place and whereby the victim was lying on the ground not showing any signs of life. Inspector Ricardo Henson said that the information that came into the Police Central Dispatch was that an off-duty police officer was involved in the incident.

The scene was immediately cordoned off by the investigating officers.  According to witnesses the incident happened after a very heated verbal confrontation between the off-duty officer, who was at that time driving in his personal vehicle and a group of men from the neighborhood. At one point during this confrontation the situation escalated and got out of control.

This is when according to witnesses shots were fired, leaving one young man dead on the street. The Forensic Department was on the scene collecting evidence while the detectives were gathering information and questioning witnesses. When contacted by our reporters the Mother of Isidora said “Thank you Jesus”. Stay with 721news as we bring you accurate news about the case.