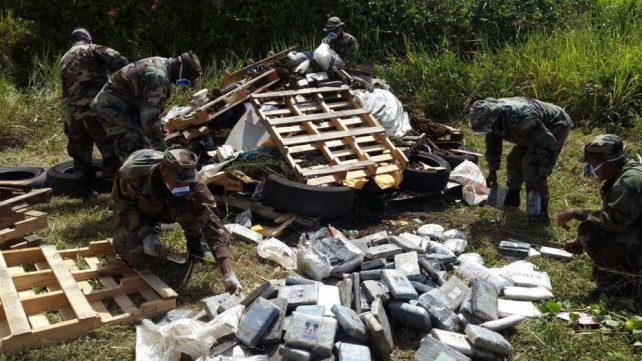 Close to $5-million worth of cannabis, cocaine and cannabis resin have been destroyed by local police.

Head of the Drug Squad, Inspector John Carbon, said the illegal substances were seized over a three-year period.

“What we are witnessing here today is the destruction of drugs, mainly cocaine and some marijuana and these have been seized over a period of three years, up to last year,” he said.

Carbon said most of the drugs were not locally produced.

“Most of the drugs have been imported into the country,” he noted, “We know that Dominica is a major transshipment point of these drugs and in so doing we find it fit to do our job by confiscating the drugs on its way out of Dominica.”

The Head of the Drug Squad pledged that the police will do all they can to “minimize the importation and use” of these drugs on the island.

“We will continue to do so,” he promised. “We are just trying to make the society a better place for all of us.”

Carbon also said there increase in drug trafficking in Dominica, “but we are stepping up to that sort of activity.”