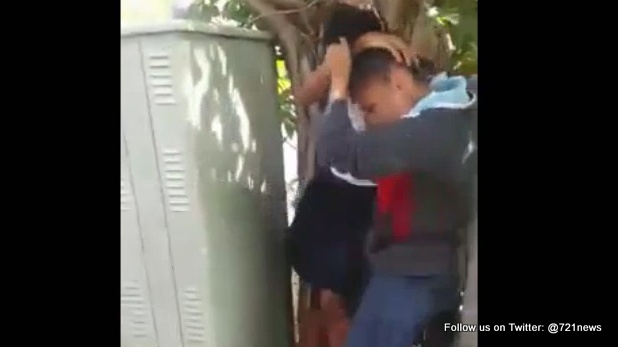 PHIIPSBURG, Sint Maarten — On Monday, March 23rd 2015, an 18-year old schoolgirl reported herself at the police station in Philipsburg. She claimed she wanted to apologize to a 14-year old schoolgirl whom she fought with shortly before. At that time police officers had no information about the fight this girl was talking about because there were no reports of the incident. Because it is not possible for the police to arrest someone without charges being pressed against them, the young girl was sent home.

On Wednesday, March 25th, a 14-year old girl came to the police station to file an official complaint of an incident which took place on Monday March 23rd. She told the police officers that she was harassed by an 18-year old in the vicinity of L.B. Scott road. The 18-year old started hitting her old until she fell to the ground where the 18 year old continued to beat her.  The victim lost consciousness during the assault and had to get medical assistance because of her situation. The incident was taped by bystanders and posted on social media websites. After recuperating from the assault the victim decided to press charges against the 18-year old schoolgirl.

On Friday, March 27th, the 18-year old schoolgirl (suspect) was arrested by police officers in connection with this case and taken into custody by the Prosecutor. The investigation by the police department continues. The principals of both schools the girls attend are cooperating in the investigation; the detectives have  constant contact with them to inform them about the case. Also the CPO of the St. Peters area is assisting the detectives with this serious case.

On the request of Sint Maarten Police Force the 721News cooperated (we where not obligated) and removed the VIDEO.

Now we hope the St Maarten Police Force can also cooperate with our News Media !!!!