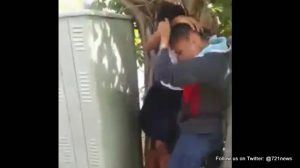 PHILIPSBURG, Sint Maarten — The 18-year-old woman, J. B. R., who is suspected of assaulting a 14-year-old girl, is released from her pre-trial detention yesterday March 31, 2015. The woman was arrested on Friday, March 27th, 2015, after the victim pressed charges of mistreatment against her the previous day. The assault has caused commotion since this was filmed and posted on social media.

The Prosecution considers the assault as a serious offense, but the personal circumstances of the suspect have been decisive for the suspension of the pre-trial detention. The suspect is of a young age, she has no criminal record and has not been involved in fights or aggression at school before. Also is taken into account that the suspect, already on Monday after the brawl, reported herself to the police. She has fully cooperated with the investigation. Given those circumstances, the prosecutor advised the judge of instruction to suspend the pre-trial detention under certain special conditions.

The accused must visit the probation service and cooperate in the creation of a psychological and/or psychiatric report. The judge followed this and also imposed a prohibition on contact with the victim. The school will make it possible for the suspect to make her exams. The suspect will be under the supervision of the “reclassering” (probation), at least until the court hearing. It is not yet known when the court hearing will take place.

In anticipation of its future role as an office of victim care, the prosecution asked the Court of Guardianship to start a conversation with the young victim and her family. They shall look in to the possibility of mediation. In the meantime, the police will continue to investigate the brawl. They will investigate who has filmed the fight and who encouraged it. The prosecution emphasizes that the filming a fight under circumstances is punishable (“happy slapping”). Also encouraging a fight may be punishable. It is always better to try to stop a brawl or to get help.