Philipsburg – Minister of Defense, Jeanine Hennis-Plasschaert wrapped up her visit to the islands of Curacao, Saba, St. Eustatius and St Maarten on Thursday afternoon. While on St Maarten on Thursday, the defense minister met with Governor Eugene Holiday, Prime Minister Marcel Gumbs and Minister of Justice Dennis Richardson. Creating stronger relations between the Dutch Kingdom was the Ministers main agenda with St. Maarten specifically.

The Minister told reporters that our arm forces such as the coast guard and the military forces was discussed with the authorities on the island.

The Justice official was tight lipped about the rest of the agenda points during the meetings due to the sensitivity of the information. She did however commend the Minister of Justice for being a trustworthy partner of the kingdom.

The possibility of structural cooperation between the countries should also grow said the minister. She did stress that the Coast guard is important to St Maarten. Former Minister of Justice Roland Duncan was critical about the presence of the coast guard in St. Maarten because the coast guard hardly makes any arrests in our waters and it is costing the island covers millions. Based on agreements between Justice Officials to date, the coast guard must stay put in St. Maarten.

The Minister of Defense also made mention of the lines of communications of all the justice ministries. “We should communicate directly instead of doing it in the media”. She concludes her working visit today and returns to the Netherlands after what she called successful talks. 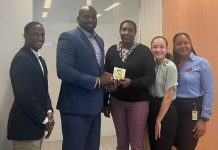