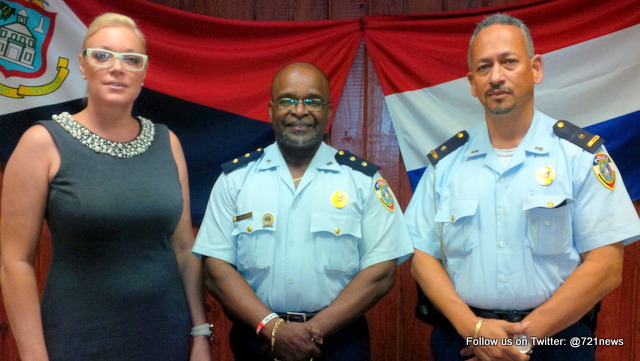 Philipsburg – Organizer of the 4th annual lighting Parade Brenda Wathey I of Rio Productions is ready for the jump up event scheduled for Saturday April 11th. Wathey alongside the police held a press conference on Thursday afternoon to inform the media and the general public at large that expectations are high for this year’s event.  Over 1000 participants are expected to flood the streets of Philipsburg with special T-Shirts purchased weeks before the event. Grown over the years Wathey informed that just 4 years ago, we started with 200 T-shirts now we are up to 1000, the event is sold out annually.

The lighting parade is expected to kick off from the Le Grand Marche parking lot. Revelers take the streets in the evening hours protected by Security and a rope sectioning them from by standers. In charge of Public Safety the police department will lend close to 40 officers for the evening to ensure the safety of the revelers. International bands WCK and Grand Masters will be on the island to head the anticipated parade with their energy and popular road March songs.

The parade starts at 8:00pm and is expected to finish at 1:00am. Chief inspector Bejamin Goud who is also the head of the traffic division announced that the roundabout on the Bush road will be closed from 7:30pm and the public is advised to take the necessary deviation from their regular route. Super woman costumes are still available at Wathey office located next to Jump Up casino in Philipsburg.