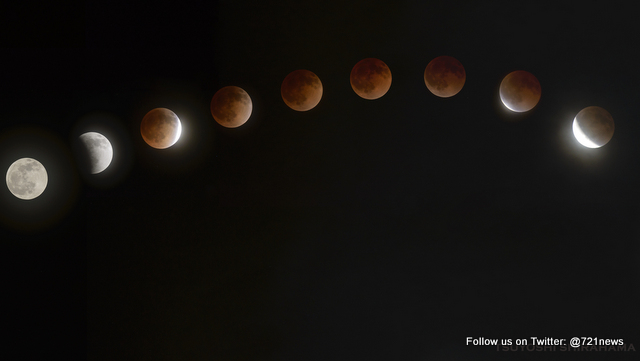 This total lunar eclipse (*) will occur on April 4, 2015. Most of North America, South America, Asia and parts of Australia will be able to see the eclipse.

The eastern coast of the United States will be treated to an early morning eclipse, while locations in South Asia will experience the eclipse in the evening.

The eclipse will last for 3 hours and 29 mins from beginning to end. The Moon will be totally eclipsed (totality) for about 5 minutes.

(*) Total eclipses with a very short period of totality and partial eclipses that come close to reaching totality may be labelled wrongly or inconsistently as total or partial eclipses. We are aware of this problem and are working on a solution.

Taking pictures of the Moon

This April 4 eclipse is the third in a tetrad, a series of four consecutive total lunar eclipses in 2014 – 2015.

The term Blood Moon, has recently become popular when referring to the total lunar eclipses in the 2014 – 2015 lunar tetrad. This term has no technical or astronomical basis and it is unclear where the description originated.

Is this Total Lunar Eclipse visible in Miami?

The animation shows approximately what the eclipse looks like from the night side of earth.

Where to see the eclipse

Regions seeing at least some parts of the eclipse: Much of Asia, Australia, Much of North America, Much of South America, Pacific, Atlantic, Indian Ocean, Arctic, Antarctica.

Is this eclipse visible in Miami?

When the eclipse happens worldwide

Lunar eclipses look approximately the same all over the world and happen at the same time.

The times displayed might be a minute or two off actual times.

* The Moon is below the horizon in Miami some of the time, so that part of the eclipse is not visible.