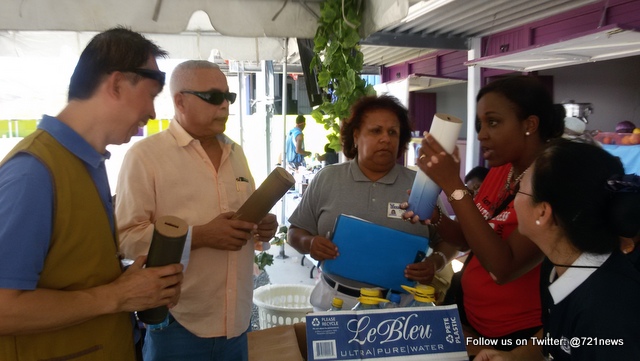 PHILIPSBURG, Sint Maarten – A total of 250 persons were served by Tzu Chi Foundation and some 60 received free Thai reflexology foot massages as well as back massages from the foundation at the Lion Rudy Hoeve Health and Wellness Fair last Saturday.

The massages were popular amongst attendees with people lining up to wait for a massage even before the fair officially began. For some, it was the first time they received a massage.

The massages were performed by a team of five Tzu Chi volunteers led by massage therapist Roger Yee-Fong.

Tzu Chi literature was also on display as information about the foundation was also shared with guests. A total of 15 Tzu Chi Foundation volunteers participated in the activity and some 35 new persons registered to support the foundation’s fund raising drive with its recycled Bamboo Banks (collection boxes). The Prime Minister was amongst those who signed Tzu Chi’s support list and requested 20 of the bamboo banks. He was happy to see that the bamboo banks were made from used water bottles. Elshot said Gumbs also supports the idea of having the bamboo banks at various Ministries in government.

Tzu Chi volunteer Bradly Attyl said the experience at the fair had been a fantastic one for him. “What captured me was that so many people came to get a massage. I was honoured to have given a massage the honourable Prime Minister Marcel Gumbs,” he said. “People were happy and satisfied and it gave me a nice feeling. As Tzu Chi founder Master Cheng Yen says: ‘Every drop of water makes a river.’ Let us continue to walk in Tzu Chi’s path.”

Volunteer Shung Hing said participating in the fair under Tzu Chi’s banner gave her an opportunity to work together and bond with other volunteers. “It was great seeing the people enjoy our relaxing foot massages. Even more satisfying when they said it was worth the wait.”

Elshot said she too enjoyed the opportunity to give massages.

Tzu Chi Commissioner Sandra Cheung thanked all those who, in one way or another, contributed to Tzu Chi’s successful participation in the fair. She singled out Yee-Fong for encouraging Tzu Chi to participate and the Fair organisers for providing the forum for Tzu Chi and other groups to participate.