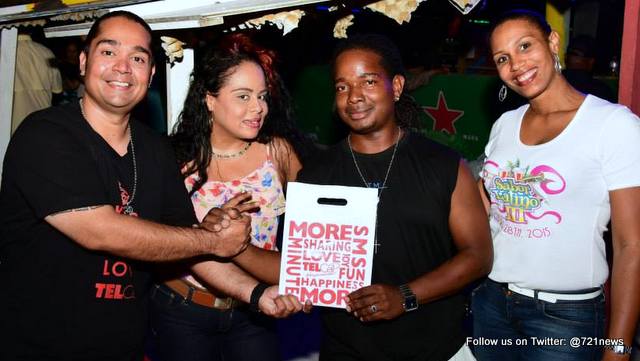 PHILIPSBURG, Sint Maarten – The first Telcell bachata competition was hosted at La Bamba. Six couples participated and in the end the couple both from the Dominican Republic “Leidy Lopez and Edward Lorenzo”  was the crowd pleaser. Leidy and Edward will be number one (1)  when texting to “7511”on the TelCell SMS campaign which begins on Monday March 30th and will end on April 28. Only $0.50 per text.
For those still wishing to participate the next opportunity will be Saturday March 28 at Rancho andSunday March 29 at Son Latino.
Captioned in pictures attached are winners and TelCell representative Suraj Ramdas and Grisha Heyliger-Marten of Montage NV