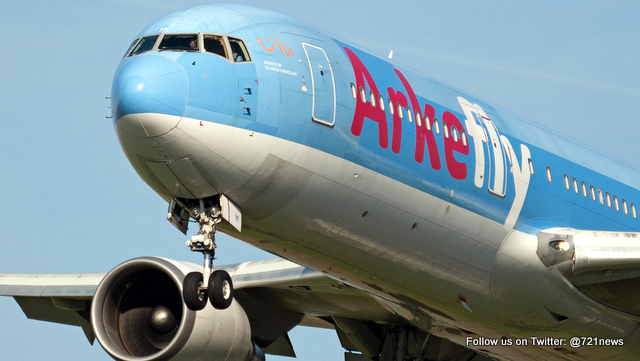 SIMPSON BAY, St. Maarten (Wednesday, March 25, 2015)–The Princess Juliana International Airport, SXM, has expressed its commitment to the success of the new service that Dutch airline Arke Fly will soon start and has offered to waive departure fees for any Fam Trips the company may host while granting said Fam Trips complementary use of SXM’s Executive Lounge.

SXM’s managing Director, Regina LaBega, announced this at a recent meeting with Arke Fly’s Area Manager for Aruba, Bonaire, Curacao and St. Maarten, Lara Soetekouw and Sales Manager Marlow de la Fuente. While both parties expressed concern about the sustainability of the flight, given its past experience, it was agreed that the double stop with CUR would help to address this issue.

The previous Arke Fly service was a non-stop Amsterdam-SXM flight. At the time, the company’s low fares were matched by a major carrier. This time around Arke Fly will operate an Amsterdam-SXM-CUR-Amsterdam flight twice weekly with 60% of the seat allocation going to Curacao and the remaining 40% capacity to St. Maarten.

“Of course, we would like to see this seat allocation reversed so that St. Maarten could get the lion’s share,” remarked LaBega. She added that SXM’s hub function and partnership with several airports in the region, especially the country partners of the Air Service Development Committee (ASDC) that use SXM as their international airport, would hopefully tilt the scale in favor of St. Maarten obtaining a larger share of the seating capacity on the Arke Fly flights.

For its part, Arke Fly disclosed that it currently has partnerships with hotels on Saba and St. Eustatius and expressed an interest in further exploring the opportunities with other partners, like Anguilla, St. Barths, Dominica, and Nevis.

The starting date of the Arke Fly service to SXM is still to be determined.